How to spend a MAHG weekend? - Visit Kent State

Ashland University’s Masters in American History and Government has announced that its graduate programs will be ON CAMPUS in the summer of 2021. With apologies to Neil Armstrong, it is one small step for our grad students but one giant leap for our post-pandemic return to normal. I spent many summer weeks in Ashland as a MAHG student, grateful for its weather (slightly cooler than in my South Carolina hometown) and thankful for the stimulating conversations in class and for the bonds I built with other MAHGsters.

Each spring, the MAHG program’s Executive Director Chris Pascarella emails tips on “how to survive a MAHG summer,” which include suggestions for students taking more than one course, planning a weekend stay in Ashland. As exciting as it can be, Chris knew there is only so much time one wishes to spend at Grandpa’s Cheese Barn. Chris included popular tourist spots like the nearby prison used in the filming of Shawshank Redemption, the Rock and Roll Hall of Fame in Cleveland, and the Cleveland Indians ballpark. One summer, I went to Cleveland with the Yankees fan I roomed with to see the Yankees play the Indians. Still, the most memorable MAHG weekend excursion I took was to Kent, Ohio, and the campus of Kent State University, where on May 4, 1970, four students were shot to death by members of the Ohio National Guard.

On a Saturday morning, I drove the hour to Kent with my colleagues Cheryl Adams, who teaches in Caldwell, ID, and Karin Cummings, who teaches in Phoenix, AZ. We enjoyed lunch in Kent’s quaint downtown before going to the campus to experience as best we could the events of that fateful day in 1970.

I have heard it said that the decade of the 1960s as we know it, or think we know it, began on November 22, 1963 and ended on May 4, 1970. The assassination of President Kennedy and the killings at Kent State bookended a decade famous for sex, drugs, rock-n-roll, turning on, and tuning out—yet roiled by urban riots, anti-Vietnam War protests, and more assassinations.  Beginning college soon after President Kennedy’s assassination, many in the first wave of the baby boomer generation became disillusioned by his assassination and those that followed. They were frustrated by racial injustice, the slow pace of social change, and the stalemate in Vietnam. For some radicals in the anti-war movement, Kent State proved that “the establishment” felt so threatened by the youth of the 60s that they would kill to maintain their privileged status.

After May 4, four million students at 450 high schools, colleges and universities went on strike to protest the war and the Kent State killings. On May 9th, a protest crowd of approximately 100,000 gathered at the Lincoln Memorial to hear songs, speeches and chant anti-war slogans. Neil Young of Crosby, Stills, Nash and Young composed the song “Ohio,” which became an anthem of the protest movement. However, as Nixon accelerated the troop withdrawals he’d initiated in 1969, the focus shifted from student protest on college campuses to protests by Vietnam veterans, and organizers struggled to maintain momentum.

Just before May 4, however, Nixon announced that he had ordered American troops to invade Cambodia, arguing the invasion was necessary to destroy North Vietnamese supply lines and defend US soldiers from attacks originating from Cambodia. Nixon’s announcement prompted the anti-war demonstration at Kent State.On Friday, May 1, students clashed with local police in downtown Kent, leading to broken windows and arrests. On Saturday, May 2, someone—exactly who remains a mystery to this day—set fire to the campus ROTC building. Ohio Governor James Rhodes mobilized the state’s National Guard and the Kent mayor imposed a curfew.  Neither move stopped the student protestors. They staged an impromptu sit-down demonstration in town Sunday night and called for a campus demonstration at noon on Monday, May 4. 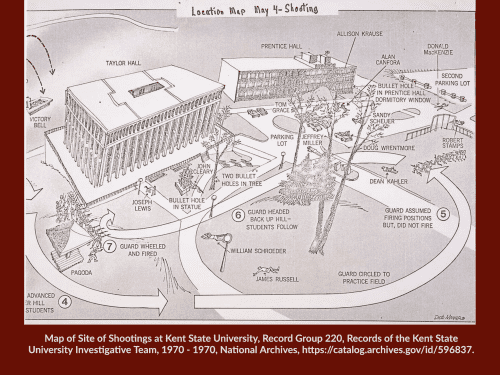 Visiting some historic sites requires a healthy imagination. For example, to imagine the chaos in Washington, DC on the night President Lincoln was shot at Ford’s Theater, one must ignore the tacky souvenir shops surrounding the theater and the Peterson House across the street where he died. This is not true of Kent State. The May 4 Visitors Center, housed in Taylor Hall, includes a small museum. One half presents the Vietnam War in context and one half covers the events on May 4. Karen, Cheryl, and I toured the Visitors Center, and then I walked down the hill onto the commons and found the Victory Bell, which struck me as surprisingly small. Students rang the bell at noon on May 4—signaling demonstrators to gather.  The commons remain open ground today, so it is easy to picture the National Guard mustered just beyond the commons, next to the burned out ROTC building. They stood facing Taylor Hall and the students, at a distance of approximately 100 yards. When students did not comply with their order to disperse, they began marching uphill toward them, launching tear gas canisters.

Cheryl, Karen and I walked up the hill beside Taylor Hall, where students ran to escape the tear gas. Some students picked up the tear gas canisters and threw them back toward the Guardsmen, while others threw rocks. The guardsmen followed the students up the hill and around Taylor Hall, where they turned, seemingly satisfied they had succeeded in dispersing the crowd. Suddenly the guardsmen turned and fired into the parking lot behind Taylor Hall, where the fleeing students were crowded. I stood in the spot where the Ohio National Guard turned and fired, killing four and wounding nine others. I saw a bullet hole in a 2-3-inch-thick metal sculpture at the top of the hill, and wondered how anyone holding a loaded rifle could feel threatened by students hurling rocks at them.

The May 4 Visitor Center website does an excellent job detailing what is known about May 4 and what questions remain unanswered, including: Who set fire to the ROTC building? Why did the Guard suddenly turn and fire into a crowd of students?

Although I found the visit to Kent State disturbing, I am glad I chose to visit the site and not spend my MAHG Summer weekend relaxing. I stood at the top of the hill where the Ohio National Guardsmen stood, looked into the parking lot where they fired and asked – why did American soldiers shoot to kill American college students? I urge my fellow MAHG students staying in Ashland for MAHG weekend to take advantage of one of the intangibles the program provides. Invite some colleagues to join you on a Saturday excursion to one of the historical sites in Ohio.

The Story of the Constitutional Convention: as James Madison Wanted It Told

Secession in Arkansas and Tennessee