Eisenhower in a Time of Crisis

On June 5th, 1944, just one day before D-day’s Normandy landings, General Eisenhower composed a short letter to be read to all of the soldiers and sailors who would take part in the largest amphibious assault in history. Portions of the “Order of the Day” may seem triumphalist to today’s reader. Yet, at the time, Eisenhower felt not only the weight of sending nearly 200,000 troops into a deadly invasion, but the pressure that came with a sense that the future free world depended on their success. He wanted to give those about to join this fight a sense of their own place in the larger struggle, before they charged into the face of machine gun fire and began a miserable and deadly march across Europe against a powerful and entrenched foe, full of soldiers fighting for their own lives.

“You are about to embark upon the Great Crusade, toward which we have striven these many months. The eyes of the world are upon you. The hope and prayers of liberty-loving people everywhere march with you….I have full confidence in your courage, devotion to duty, and skill in battle. We will accept nothing less than full victory.  Good luck! And let us beseech the blessing of Almighty God upon this great and noble undertaking.”

Today, the success of the invasion seems inevitable. It did not seem inevitable at that moment. Privately, Eisenhower wrote another letter to be sent to the troops in the event that the invasion failed:

Our landings in the Cherbourg-Havre area have failed to gain a satisfactory foothold and I have withdrawn the troops. My decision to attack at this time and place was based upon the best information available. The troops, the air and the Navy did all that bravery and devotion to duty could do. If any blame or fault attaches to the attempt it is mine alone.

But the landing did succeed. In a struggle of good against evil this crucial moment turned the tide against the darkness that a Nazi-occupied Europe had brought on the world over the past few years. 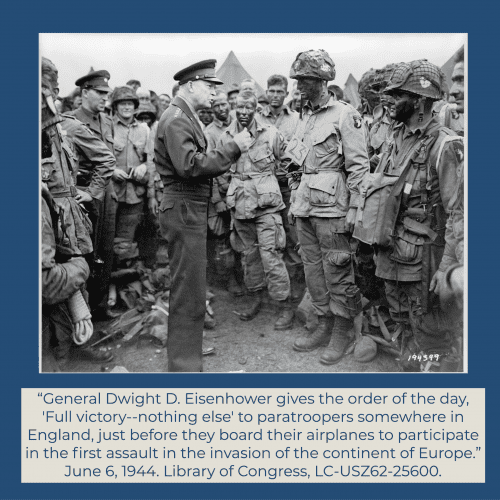 When, a few years later, Eisenhower told the story himself, he suppressed any mention of the uncertainty he and others felt prior to the invasion.  His 1948 book Crusade in Europe has notes of grandiosity, pride, and conviction, but not the fear and vulnerability that the men about to land at Normandy actually felt.

Eisenhower would go on to eight tumultuous years in the White House. He oversaw American foreign policy during the transition between the early Cold War to “The Cold War” of mutually assured nuclear destruction. Domestically, the 1950s saw the Civil Rights movement begin to bloom and the economy begin to transform as highways and new technology increased urbanization and suburbanization.

And yet, what Eisenhower is most remembered for is presiding over the Allied war effort in Europe. He was, it is likely true, the greatest General in American history, not so much for his strategic brilliance as for his leadership.  During the most uncertain and terrifying moments of the second world war, he summoned the words and the resolve to ask those under his command to present themselves for sacrifice. He did this by providing them with an ennobling conviction that they, as ordinary humans, were capable of doing great things during dark times.

Our current crisis does not require us to storm a beach while gunfire rains on us from above. Bravery and sacrifice are called for, though. Medical professionals, first responders, grocery store employees, and caretakers of the elderly, teachers working remotely, clergy providing spiritual care for their communities from a distance  and many more will all work long hours for relatively low pay in order to keep society functioning as best as possible. What we know is that while we can control very little, we can choose the actions we take. Do we behave responsibly by “social distancing” as much as we can? Do we look for ways to continue living in community while we are physically apart? And, for those of us who teach, do we show confident leadership, reminding students that we believe in their ability to learn and grow during times of challenge?

Join us to discuss other examples of presidential leadership in times of crisis during our webinar tomorrow at 1pm EST.

Resources for Teaching Online: Webinars on Political Principles and Problems