History and Government Teacher
Northwest School of the Arts

Knowing the Facts, a Teacher Can Invite Students into a Discussion

Alan Vitale was a researcher at the Fifth Circuit Federal Court in Houston when he decided to do something more important. “I left to teach, because teaching has an impact on the next generation that will far outlive any of the work I would have done in the law profession.”

He has taught in three different school settings in the Charlotte-Mecklenburg School District as a teacher of history and government. One served a high-poverty area, another a wealthy suburb. Now he teaches at Northwest School of the Arts, which pulls in students from throughout the large district. At all three schools, his students have excelled on advanced placement exams and North Carolina’s standardized achievement tests.

A Young Nation—With a Dense History

At Northwest, Vitale teaches every level of US history (regular, honors, and Advanced Placement) as well as AP government. He constantly builds his content knowledge. “As a country we are relatively young, but our history is dense. Big events have turned on the smallest of issues. If you don’t learn the minutiae, it’s hard to piece it all together,” he says.

Earning his BA at UNC-Chapel Hill, Vitale studied international relations and economics.  He needed to take a few history courses to get his social studies credential. But much of what he knew about America came from his private reading. He knew there were gaps in his knowledge. Then he discovered Ashbrook teacher seminars.

“Ashbrook’s Teaching American History seminars were career-changing,” Vitale said. They helped him master crucial details of the American story, increasing his teaching effectiveness so much that he was named “Master Teacher” for all the Advanced Placement US history courses in his district. “I’m responsible for 30 schools, making sure that their teachers get the advice and resources they need, in addition to teaching my own classes.”

A Free Gift of Education 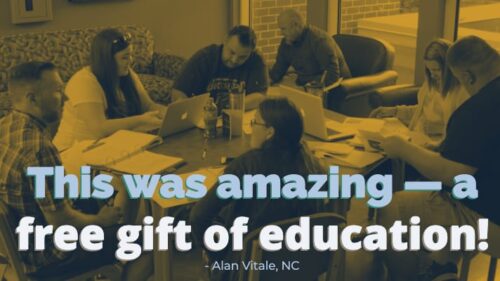 Heading to his first Ashbrook program, a weekend seminar co-sponsored with the Liberty Fund, Vitale was cautiously optimistic. Focused on the American Founding, the program would take place in Williamsburg, Virginia, the state’s original capitol. Between sessions, teachers would tour colonial sites not open to the general public.

Vitale already admired the professor leading the seminar, Ashbrook Senior Fellow Gordon Lloyd. He is “the expert on the Founding,” Vitale said. “In his interactive online exhibits on the Constitutional Convention (features on Ashbrook’s Teaching American History website), he assembled information you can’t find anywhere else.”

The opportunity to learn from Lloyd while visiting key sites at Williamsburg seemed almost too good to be true.

“I read about Ashbrook, and wondered if they had an agenda. Why would anyone bring together teachers from around the country for three days of study? Wouldn’t they want something in exchange for that? A teacher I met from New York mentioned the same concern: ‘I’m waiting for it to get political.’ At the end of the weekend I said to him, ‘It never happened, did it?’ He replied, ‘This was amazing—a free gift of education!’”

Instead of lecturing, Gordon Lloyd opened a conversation. “He walked us step by step through the founders’ deliberations, helping us analyze the conflicts and compromises. He invited us to pick his brain, to shoot ideas back and forth, and to try out our own interpretations.

Replicating the Conversation in the High School Classroom

“Later, in my own classroom, I asked my students to read excerpts of Madison’s account of the Convention. Then we talked about the problems the founders had to resolve. I found myself mimicking Professor Lloyd in some of the questions I posed to students, so that they could digest the material in the same way I had. I watched them reach many of the conclusions we teachers had reached,” Vitale recalled.

Vitale could structure the class in this way, knowing it wouldn’t dissolve in confusion, because now he knew the facts. He would be able to steer students back on course if they went off track. “That’s a great place to be as a teacher,” Vitale said. “It frees you up to explore issues in depth.”

Vitale began using all the educational resources Ashbrook offered: one-day seminars for teachers within the Charlotte-Mecklenburg School District, podcasts and webinars featuring panels of scholars, and Ashbrook’s online library of primary documents, including edited collections on particular eras and themes. He now uses primary documents in his own classroom “frequently and more authoritatively.”

As in Ashbrook seminars, Vitale does not push his own views of this testimony from the past. “The documents speak for themselves. If you guide students in a careful discussion of them, they arrive at understanding,” Vitale said. Few people remember all they are told. But they do remember the conclusions they reach through hard thought in debate with others.

Moreover, careful study of primary documents tends to moderate the prejudices about historical figures we acquire by reading short, partial accounts in textbooks or online media. Vitale described a discussion in his AP course on President Abraham Lincoln’s Emancipation Proclamation. Issued during the most intense fighting of the Civil War, the document is peculiar for “what it does and does not say,” Vitale noted. Was Lincoln not really serious about abolishing slavery, as some of his critics have claimed? Vitale’s students discussed the political reality Lincoln faced in 1863. “They deduced that Lincoln was under pressure not only from Northern abolitionists but also from other Northerners who weren’t quite ready to see all the slaves freed. They came to that conclusion­—I didn’t tell them that,” Vitale said.

History class should “help students think critically about the issues facing the country today, by learning how we addressed similar issues in the past,” Vitale says.  Class discussion should teach critical thinking skills. “To speak with authority on an issue, students must listen carefully to what others say before and after them. They must analyze those statements before countering them.” In the process, students push each other to rethink their claims, realizing their errors and exaggerations.