Lindsay Peterson teaches at Millbrook School, a private college preparatory boarding school about two hours north of New York City. During her second year at the school, while feeling she “had a lot more history to learn,” Peterson began master’s work in a joint program of the Gilder Lehrman Institute (GLI) and Adams State University. As she neared the end of her coursework, the partnership between GLI and Adams State abruptly ended. “I did not want to interrupt my momentum, so I researched new options,” Peterson recounted. “At a GLI summer teacher seminar, a Madison Fellow told me about the Master of Arts in American History and Government (MAHG) program and how amazing it is – in its course content and format, its professors, and its flexible combination of online and in-residence options. I immediately reached out to MAHG Director Chris Pascarella and started the transfer process.”

Peterson appreciated MAHG’s “emphasis on primary sources” and academic rigor. “Often, when the audience is teachers, master’s programs in history are watered down. I appreciated being pushed and held to a high standard. The participation-focused classes were intimidating at first, but they helped me make sense of the material – while giving me empathy for the students I teach at Millbrook, whom I am always pushing to think harder.”

Founded during the Great Depression by Edward Pulling, Millbrook strives to be “progressively conservative” while putting community at the center of its educational program. Each of the approximately 300 students plays a role in campus upkeep, from recycling to gardening to caring for animals at the school’s AZA-accredited zoo, a local community attraction. Students also contribute community service to projects off-campus.  “Our school’s motto is ‘Non Sibi Sed Cunctis,’ meaning ‘not for oneself but for all,’” Peterson says. “We work to maintain an environment in which, as we say, ‘all the students are needed and known.’”

When COVID-19 required a campus closure and shift to online learning, Peterson and her colleagues had to work to stay in close relationship with distant students. Students’ access to reliable wi-fi presented a problem in some cases. The larger challenge was upholding shared commitments and purposes when usual activities were suspended.

Planning the Shift to Online 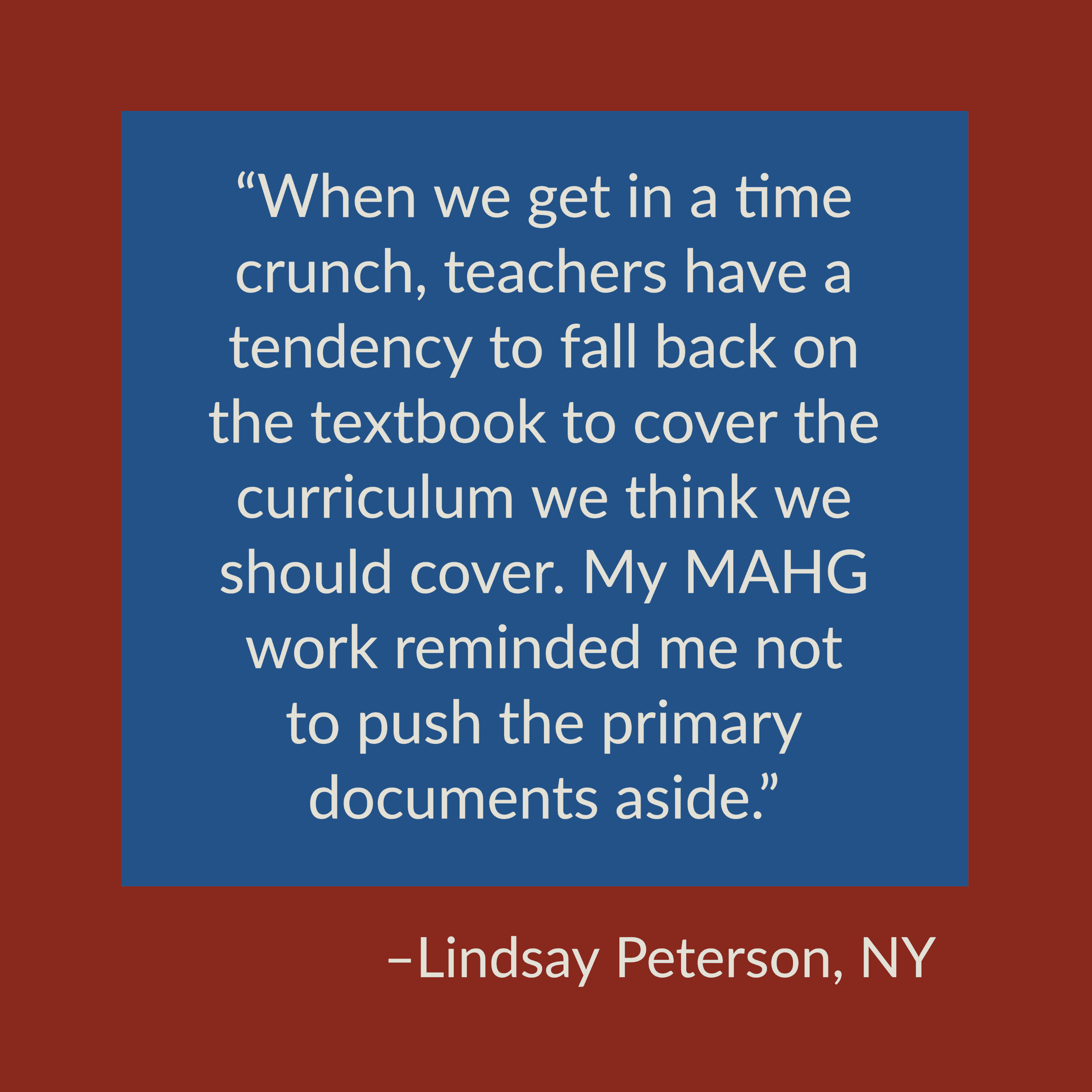 Since the closure came during spring break, the school prolonged the break by an extra week, to give teachers time to plan for distanced learning. To limit the fatigue of sitting long hours in front of a computer, administrators streamlined the schedule. The usual five classes a day became three, each class meeting only two times a week. As at other schools, faculty needed to “pare the instruction way down.” The history department met to hash out “the most important skills and content” they would cover during the six remaining weeks of school. “This is a good conversation to have with colleagues at any time,” Peterson said.

“As a department, we’ve always been more focused on skills development than on coverage of content, so it was an easy decision to prioritize analytical writing,” Peterson continued. Sophomores (in Peterson’s 20th Century World History course) had to complete the end-of-year research paper. Juniors taking American History wrote a short analytical essay on each remaining course unit.

Teachers debated what content to cover. “In US history, which we teach thematically, we might in a normal year have covered a dozen more topics. Now we decided to cover one topic a week.” Peterson said. “I pushed to keep a week on the women’s rights movement. I’ve always thought it important to tell the more forgotten parts of history – not just the presidents and the wars, but the experiences of the everyday people – and women’s experiences are so often forgotten in history classes.”

The slower pace allowed ample time to read primary documents. “When we get in a time crunch, teachers have a tendency to fall back on the textbook to get through the curriculum we feel we should cover,” Peterson commented. “My MAHG work reminded me not to push the primary documents aside. There is no better way to understand the experience of a group of people than from reading their perspective on events.”

Students completed the reading on their own time; class time was reserved for discussion, much of it in the break-out groups Zoom allows. “These discussions  took us beyond identifying the main ideas in the documents; they pushed students to analyze complex historical questions. For example, we discussed whether or not the US should have gotten involved in Korea and whether or not the Great Society was a federal government overreach.”

Yet Peterson admitted to feeling “like I’m teaching blind” through the video platform. She could float from group to group to monitor discussions, but she could not read the dynamic in a breakout room before intruding, startling students as she suddenly appeared on their screens. In the larger group, she and her students had to learn how to converse without having a clear sense of the geography of the room as a whole. “In the classroom, students can respond to each other, keeping the conversation fluid. Now I needed to be involved more between every comment, directing the flow,” Peterson said. “I tried using the hand-raise button to recognize students who wanted to speak, then asked students to raise their actual hands on screen. It felt clunky.” Was  the student speaking responding to what was just said, or to something said at the time she raised her hand? Gestures didn’t help. “Eventually our students figured out they had to use phrases like, ‘as John said.’ It took some practice.”

Still, with the normal community life of the school suspended, students really needed time for thoughtful discussion. As Peterson explained, “One goal we can’t easily pursue during remote learning is character development. Students who work as partners on classroom projects and in community service activities practice cooperation. They are often paired with those whose opinions differ from their own. This helps them build empathy and interpersonal skills.” Yet students also develop empathy while reading firsthand accounts of the past. Primary documents give students access to the motives and concerns of earlier Americans. As they talk with others about primary documents, students share insights, working together toward an understanding of the choices our ancestors made.

Often, primary documents reveal perspectives on both sides of a question. Peterson’s last online unit this year asked students to read a range of accounts of a current military policy. “I asked students to consider whether or not the U.S. should use drones to kill enemy combatants. Students read justifications for the program written by Presidents Obama and Trump, criticisms of the program from Al-Qaeda, and comments from American ambassadors and army chaplains. They read the Geneva Conventions of 1949 and looked at statistics comparing numbers of combatants to numbers of civilians killed. To understand the authority of Congress and the president over military policy, they read sections of the Constitution, the Gulf of Tonkin Resolution, the War Powers Resolution, and the 2001 Authorization for Use of Military Force.”

Then Peterson staged a modified fish bowl discussion. Four students kept their cameras on while discussing the documents they’d read; when another wanted to jump in, they would ‘tap’ someone out – via the chat – and turn their own video on. “As students dug through this recent history, they realized that the story was being told from different perspectives. Even if a president said the drone strikes worked in a very targeted way, limiting civilian deaths, the perspective of those on the ground differed.”

Peterson’s students also reached different conclusions. Some viewed drone warfare as “the right policy for the US, as it saved the lives of US soldiers or protected citizens at home from future attacks. Other students concluded that the policy gave too much power to the executive, or that drone warfare was not the proper role of the U.S. abroad.” Even when everyone reviews the same evidence, “interpretations vary,” Peterson said. This does not relieve policymakers, voters, or historians of the responsibility to judge what is right and wrong. Yet close study of primary documents does teach that, before making those judgments, Americans should consider competing views.