The Diminished Yet Necessary Role of Political Parties 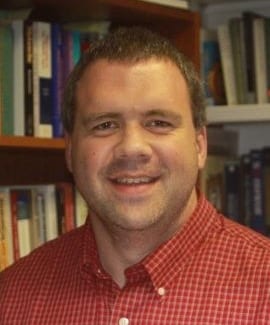 With attention now turning to the Democratic and Republican National Conventions, we offer today an interview with the editor of a new volume in our Core Document Collection, Political Parties. As Professor Eric Sands notes in his introduction to the volume, the founders excluded from the Constitution any reference to political parties. Hence Sands’ collection helps to explain  their emergence in our political life. Sands documents the critical role parties played in 19th century politics, as well as their declining influence in the 20th and 21st centuries.

In the interview below, Professor Sands explains his view that republican government “needs parties to be effective, perhaps most importantly to form a bond between the electorate and their elected representatives.”

Sands is the author of American Public Philosophy and the Mystery of Lincolnism (University of Missouri, 2009). He teaches government at Berry College in Mount Berry, Georgia, where he received the Outstanding Faculty Award in 2009 from the Student Government Association. He also leads one-day seminars offered around the country by Teaching American History and teaches in our Master of Arts in American History and Government program.

Parties had a bad name in the United States until well after they started to form. Washington warned against parties as he left office; Jefferson, who organized the first party in order to oppose the policies of Hamilton, nevertheless insisted in his first inaugural that “We are all Republicans; we are all Federalists.” Why was it hard for the new nation to admit that some kind of party system would inevitably form?

For Madison and a lot of the founding generation, parties were equivalent to factions. In Federalist 10, Madison calls factions the greatest threat to a republican form of government. He uses the word “party” synonymously with faction – around 12 times, last time I counted.

The danger arises, Madison says, when a faction becomes a majority. Minority factions aren’t much of a threat, and in a large republic, where you have many minority factions, they help to check one another, preventing any one from becoming a majority. But the last thing you want is to institutionalize political parties, giving them a legitimate role to play in the government, allowing them to become majorities and use the institutions of power to oppress other groups they disagree with.

Would you explain the difference between factions and parties?

Madison defines faction as any group of people united by common interests or passion who act adversely to the rights of other citizens or the permanent aggregate interest of the community. That is, they override minority rights and neglect the common good. At times in American history, certain parties have met that definition. The Democratic Party in 1860, with its position on slavery, certainly constituted a faction within Madison’s definition. But for the most part, I don’t think political parties have met that definition of faction. They’ve functioned more like civic associations—groups of citizens united by ideology and common interests, but not necessarily adverse to the rights of others or to the common good. Rather, they’ve debated what constitutes the common good.

I’d even include the Federalists and Democratic Republicans in that characterization. Jefferson himself said that your average Federalist wants to concentrate power in the executive, while the average Democratic Republican wants to concentrate power in the legislature. That’s the substantive gap between them, besides a few other foreign policy and domestic issues. Those are things you can legitimately contest.

For the most part, we didn’t end up with what Madison worried about. Instead, what Alexis de Tocqueville referred to as “small parties” arose. They differ not on first principles of government but on policy grounds and interests. They fight very intensely, but over relatively small things—the currency, the tariff, the Bank of the United States. 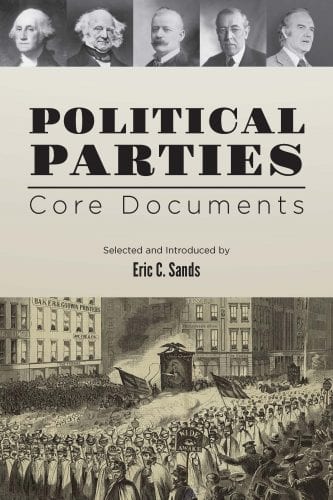 Several of the early documents in this volume show Madison and Washington worrying about the country splitting into warring geographic regions—that is, the mercantile, free-soil North versus the agrarian, slave-holding South. Then there are two documents by Martin Van Buren, who wants to build political parties to counter this tendency. To what extent did the formation of a party system slow the growth of sectionalism?

I think it slowed it significantly. I have always said the Civil War would have happened much, much sooner without the party system, perhaps as early as 1820. Henry Clay deserves a lot of credit for crafting the Missouri Compromise, but political parties made it possible, by marshaling public support and the votes for it. The parties tried to keep slavery off the national agenda, by backing the Compromise of 1850 and the Kansas Nebraska Act, and by keeping anti-slavery petitions from being read on the House floor, since they outraged Southern delegates. When slavery did end up on the agenda, the parties worked feverishly to find common ground to keep the nation from splitting apart.

Why did parties flourish at the end of the 19th century?

After the Civil War, the parties reflected the mood of the electorate, who were tired of war and conflict. The gaps between the parties narrowed. They fought about issues like the currency and the tariff, the silver and gold standards; essentially, they fought over resources. Meanwhile, the American people were very evenly divided in their party affiliations. During this “golden age” of parties, roughly between 1876 and 1896, there were only three two-year periods of unified government. Voters usually gave the House to Democrats, the Senate to Republicans, and flip-flopped on the presidency.

Meanwhile, election turnout was higher than at any other point in American history, frequently eclipsing 80%. Granted, half the electorate were not allowed to vote—women were not, and blacks were still being excluded in large numbers in the South. Still, it’s extraordinary that eight out of every ten eligible voters turned out on election day!

While the quantity of votes was high, one could question the quality of it. There was no split-ticket voting. Because many states had complex rules about how ballots must be marked, the parties began printing pre-marked ballots in the newspapers, making sure voters got the papers. All voters did was to rip the ballots out, take them down to the polling place, and put them in the box.

Yet the parties screened candidates, making sure they passed the sniff test of plausibility, were of upright character, and could hold their own on the stump and in debate. At all levels of government—local, state and national—races were competitive. No candidates ran unopposed, since the margins of victory were close: 51/49, 52/48, etcetera.

At this point, parties were organizing Congress, setting the national agenda, influencing the executive branch, controlling governors, and influencing state legislatures. In big cities like New York and Boston, they provided social services to the electorate. The ward bosses and their precinct captains helped people find jobs, learn English, become literate. They provided all kinds of welfare services long before government ever conceived of doing such things. Voters responded with loyalty. If you owe your job to the political party, you want to help it win.

Across economic levels, people embraced the party system. They felt it their duty not only to vote but to choose a party and participate in its activities. For many, party became their political identity.

The progressives attacked both the republican model of government and the party system. When Madison in Federalist 10 says representation is a characteristic of the republican form of government, he’s talking about a trustee model, where the representative acts in the best interest of constituents, not in their immediate interest. As parties arose, they served as intermediaries between those representatives and the people. I think this did democratize the framers’ constitution, adding a more popular element to it.

But the Progressives wanted to put major decisions directly into the hands of the people. They pushed not only for primary elections but for national tools of direct democracy, such as the initiative and the referendum. They were able to implement these on a state level, but not on a national level. This clearly weakened the parties, but it did not destroy them.

The Progressive push toward direct democracy seems to have been furthered by radio, television, and internet communications. As politicians use technology to appeal directly to a national audience, how does political messaging change?

When parties handled a great deal of political communication, they vetted what was said and communicated to voters. Today, politicians can use technology to reach large numbers of potential voters with nothing to limit what they say or how they say it. Candidates shape their own messages and restraint seems to be in short supply.  Some politicians seem to parrot existing prejudices and ideologies in the electorate rather than challenging them and trying to find common ground from which to build consensus and compromise. This is an area where the weakening of parties, I think, has done real harm to American politics. As the framers pointed out, ambitious demagogues who build majority factions can subvert our constitutional system.

You speak in your introduction of parties as “schools of democracy where citizens learn to associate and become attached to governing institutions.” If the parties are weakening, what will take their place?

Nothing has emerged to do the job that political parties once did: mobilizing voters, informing them, getting them out to the polls, and providing social services to the electorate. We don’t have precinct captains and party workers showing up at people’s houses multiple times on election day to make sure that they’ve voted, that they know where they stand on the issues and where the candidates stand.

In articulating the issues, political parties serve another important function. As Martin Van Buren said, the two-party system legitimizes dissent. This is a healthy thing for republican government. The minority party critiques the majority and its legislative programs. This is expected (except during times of war, when it is difficult to take the role of the loyal opposition). It ensures that we hear more than one voice on policy—that we hear different perspectives and the rationales for each.  It could certainly be argued that the weakening of parties has diminished this role of loyal opposition. Too often today we get candidates who offer simplistic visions of complex national problems. Increasingly the opposition is seen as the “enemy” that needs to be defeated rather than a legitimate alternative to majority approaches and policies.  Strengthened parties might begin to address this problem.

What has remained constant in our partisan debates?

Up until the Progressive era, I would have said both political parties shared a common commitment to Constitutional government. The Progressives attacked the Constitution itself, and their views still infect our politics. Some question the legitimacy of the Constitution—wasn’t it made by a bunch of white guys who owned slaves? Wasn’t it made by the rich for the rich? Isn’t it outdated? To the extent that either party buys into these progressive arguments, there is reason to worry. We really don’t want a situation where we have to rely on one party to be the voice of Constitutionalism, while the other party is the voice of some alternative to it that perhaps sounds good in theory but isn’t going to work out as well in practice.

Saturday Webinar: Was the American Revolution Really a Revolution?

Saturday Webinar: Why Are Both the Constitution and Bill of Rights Necessary?