In the eighteen months since Covid turned the world outside in, I wrote two blog posts on John Brown, his actions in Kansas, and the raid on Harpers Ferry. One post featured a chapter on the Harpers Ferry raid from Teaching American History’s Core Document Collection, Documents and Debates in American History and Government, Volume I: 1493-1865. The chapter focuses on reactions to the raids by abolitionists and defenders of slavery. 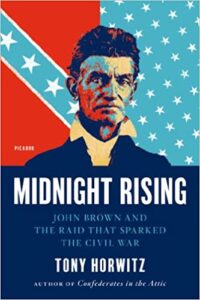 I also participated in an online seminar on Brown’s activities in Kansas and Virginia. I nodded in agreement when one teacher said, “Students tend to focus on the crimes of John Brown and not his calls for abolition.” When it was my turn to pick a book for my history book club, I selected journalist Tony Horowitz’s biography of Brown, Midnight Rising: John Brown and the Raid That Sparked the Civil War. Our book club discussed whether Brown was a terrorist or a martyr and whether he might have been a terrorist in Kansas and a martyr in Virginia (now West Virginia). I have learned a lot about John Brown. Yet, I still wrestle with the question Frederick Douglass posed in a Memorial Day speech in 1881. “Did John Brown Fail?” I also learned about the friendship between Brown and Douglass.

The basic facts of Brown’s raid on Harpers Ferry are undisputed. On the night of October 16, 1859, Brown led twenty-two men, including three of his sons and several free Black men, in an attack on Harpers Ferry. He planned to free enslaved persons in the surrounding area, capture weapons from the federal armory in town, and escape into the mountains, where he hoped to establish safe havens for his tribe. Next, he planned to raid nearby plantations – freeing enslaved persons and steering them north on the Underground Railroad from his mountain hideouts. Virginia, unwilling to let Brown’s epitaph be written later, immediately tried him for  treason, found him guilty, and executed him on December 2, 1859, less than two months after the assault on Harpers Ferry.

In the immediate aftermath of the raid, some abolitionists in the north praised Brown’s boldness, if not his judgment. Horace Greeley, the publisher of the New York Tribune and future presidential candidate, remarked that “the whole affair seems to be the work of a madman, but … what seems madness to others” may not seem so to Brown or his devoted followers. Abraham Lincoln was an unannounced candidate for president when he took the stage at Cooper Union in February of 1860. Lincoln defended his Republican party from charges that “our doctrines and declarations necessarily lead to” incidents like Harpers Ferry and dismissed Brown as a typical “enthusiast” who “broods over the oppression of a people till he fancies himself commissioned by Heaven to liberate them.” Lincoln saw no justification for southern apprehension that other would-be martyrs might adopt Brown’s tactics. Brown’s failure foreshadowed similar failures for any future raiders.

Like Greeley and Lincoln, Frederick Douglass felt moved to comment on John Brown and the raid on Harpers Ferry. Unlike them, Douglass was implicated in the attack by rumors  that he had conspired with Brown and aided his plan. Douglass tried to ignore the rumors. In November 1859, Douglass rejected the suggestion that Brown was insane or that he acted in revenge for his two sons murdered in Kansas by pro-slavery settlers. Douglass asked, would an insane man treat his prisoners in Harpers Ferry with the “humane and courteous” treatment they described after being set free? Would an insane man act with such dignity at his sentencing, knowing he was destined for the gallows? Nor did Douglass believe that Brown was driven by revenge. He claimed Brown began planning such a raid many years earlier, before the death of his sons in Kansas. In making that claim, Douglass hinted that he knew of Brown’s plan.

According to historian David Blight, Douglass considered the wisdom of using violence as a weapon against slavery throughout the 1850s. In an August 1857 speech in New York, Douglass said, “The whole history of the progress of human liberty shows that all concessions … have been born of earnest struggle. . . . Those who profess to favor freedom and yet deprecate agitation are men who want crops without plowing up the ground; . . . This struggle may be a moral one, or it may be a physical one, and it may be both moral and physical, but it must be a struggle. Power concedes nothing without a demand. It never did and it never will.” Douglass joined delegates from ten states and Canada at the Radical Abolition Party Convention in 1855, where they endorsed a resolution approving violence as a means of ending slavery. Douglass moved ever closer to Brown’s position that race-based chattel slavery was war, justifying violence to destroy it..

Douglass first met Brown in 1847 or 1848. Over the next decade, they communicated frequently. Brown stayed in the Douglass home in Rochester, New York, in 1858. He brought maps and plans, which he used in an unsuccessful attempt to persuade Douglass to join the raid. He wrote his “Provisional Constitution” while living in Douglass’s home – a document he planned to use as a governmental framework if the raid succeeded. Brown even used boards and blocks to demonstrate his plans to Douglass’s children. Douglass was desperate for “any new mode of attack” on the peculiar institution, according to historian Blight, yet skeptical that Brown’s plan would work.

By 1881, Douglass had grown comfortable with Brown’s strategy and tactics and more comfortable discussing his role in Brown’s planning. He admitted meeting with Brown in Chambersburg, PA -“From 8 o’clock in the evening til 3 in the morning” the night before the Harpers Ferry attack. Ultimately, Douglass refused to join Brown, arguing that the effort was doomed to failure. Douglass turned to Brown follower Shields Green, an escaped slave who had lived with Douglass. “Now Shields,” Douglass said. “You have heard our discussion. If in view of it, you do not wish to stay, you have but to say so, and you can go back with me.” Shields responded, “I believe I’ll go down with the old man.”

Douglass told this dramatic tale in his Memorial Day, 1881 speech, Did John Brown Fail? Looking back over 20 years, Douglass called the events of October 1859 a “strange, wild, bloody and mournful drama.” He acknowledged the intense feelings Brown’s raid generated in the country in 1859 but claimed “reason . . . though slower in deciding . . . ” rendered “judgments . . . more enduring.” Time permitted Douglass to look back on Harpers Ferry and see it in the context of a broader struggle against slavery lasting decades and only brought to a conclusion by four years of civil war. Harpers Ferry, said Douglass, is inseparable from its “antecedents and bearings.”

Although Douglass denied he encouraged or “instigated” Brown’s actions, he delighted in surviving long enough to see “the end of slavery.” And he praised the white abolitionist, saying, “His zeal in the cause of my race was far greater than mine—it was as the burning sun to my taper light—mine was bounded by time, his stretched away to the boundless shores of eternity. I could live for the slave, but he could die for him.”

In the conclusion of his speech, Douglass suggests that questioning whether Harpers Ferry was a success or failure is misguided. The better question is, “Did John Brown draw his sword against slavery and thereby lose his life in vain?” Douglass rejects the suggestion that Brown’s death was meaningless. “No man fails,” he says, “who so grandly gives himself and all he has to a righteous cause.” Douglass argued that the beginning of the war that ended slavery took place in Harpers Ferry, VA, not Fort Sumter, SC, and that it was Brown’s cause, not “the lost cause of the century” that was the winning cause because it was the “righteous cause.”

Oh, how I wish I could travel back in time – to Chambersburg, PA on the night of October 15, 1859, and listen as those two stalwarts of abolitionism—John Brown and Frederick Douglass —argued strategy in their common cause. One white and one black. Both devoted to the emancipation of every soul suffering under the nation’s “peculiar institution.” Neither man able to see the future and slavery’s imminent extinction. Both men possessing physical courage—one who risked his life to escape bondage, the other willing to sacrifice his life to free others. Both men pressing their strategic choice for attacking the enemy. One man, the white abolitionist, was ready to wield his sword to fight slavery. The other man, a black abolitionist, though tempted to fight, was reluctant because he doubted the success of the white man’s tactics. He chose to continue wielding his own weapons of choice—his pen and his voice. Brown chose a martyr’s grave. Douglass lived to see slavery outlawed in the United States, but his words in 1881 sound a note of envy. “I could live for the slave, but he could die for the slave?” Was there some part of Douglass that wishes he had made the other choice?