For Constitution Day: Gordon Lloyd on James Madison’s Record of the Constitutional Convention

September 17—Constitution Day—commemorates the final day of the Constitutional Convention in 1787, when the delegates signed the document they had crafted during 88 days of intense discussions, beginning in the preceding May. Those deliberations had been conducted in strict secrecy, to allow delegates to consider a range of options, without being derailed by criticism from those who sent them to the Philadelphia convention. Still, James Madison, thinking of future generations, took copious notes of each day’s proceedings. He would later edit his notes, preparing them to be published after his death.

In 2015, the Ashbrook Center published a new edition of James Madison’s record, Debates in the Federal Convention of 1787, edited by Senior Fellow Gordon Lloyd, Professor Emeritus of Public Policy at Pepperdine University. (The book is available in print and in an interactive form on TAH.org.)  We spoke with Lloyd  about his edition of Madison’s work shortly after its publication.

Why is Madison’s Debates in the Federal Convention in 1787 an essential document of our history?

It recounts an extraordinary moment in human history, a process of careful deliberation that Madison deliberately set out to record. When he went to the Convention, he chose a seat near the Speaker’s chair so that he might hear everything said in debate and make his original set of notes. He was intensely interested in the decisions the delegates would make; he knew that what they were trying to do—to establish a workable democratic republic across an already large nation—had never before been attempted. He had prepared for the Convention by carefully reading all the histories of ancient republics he could find and thinking about the flaws of those regimes. He had reached his own conclusions about what would make the best design for government (and it was not exactly the plan eventually adopted). He sensed that posterity would want a record of what happened at the Convention. As it happened, the delegates would agree to conduct the entire proceedings in absolute secrecy, so as to avoid prompting a public critique before a final plan was agreed on. Without the record Madison made of the speeches, we would not know today what options the Framers considered or how they reached compromises.

Why did you decide to produce a new edition of Madison’s Debates?

The historians who edited the versions now available don’t use the final version Madison left, the one he wanted published. He had used many abbreviations to make his original notes, working late in the night after each day’s debate to flesh out each day’s journal entry, but by the end of the Convention his journal was still somewhat rough. So from time to time during the rest of his career, but especially after he retired from the presidency, he worked to turn his original manuscript into a graceful literary document. 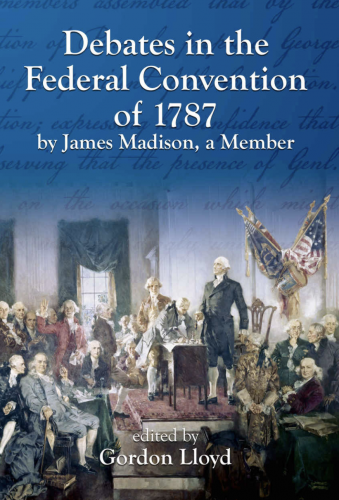 During the 19th century, Americans read an edition that had been prepared from Madison’s last edit and published by the Library of Congress. But after two copies of the original unedited journal turned up in the 1890s, Max Ferrand used these to put out a new edition for scholars. He assumed that an account written at the time the events occurred was more accurate than a later revision. He also didn’t want to call Madison’s account definitive, so he put out a multi-volume text placing Madison’s account alongside the less complete records made by others. A later 20th century editor, Adrienne Koch, dropped the other accounts from her edition, rightly elevating Madison’s account. But Koch uses the original journal also, adding a barrage of scholarly footnotes. She bestowed on Madison’s Debates the unfortunate title, Notes, and the name has stuck.

Madison wanted this journal to be a literary masterpiece that Americans could be proud of, not a set of notes and jottings. In the introduction to my edition, I compare Madison’s Debates to Plato’s Republic. Plato’s book depicts a night-long discussion between Socrates and a few friends as they outline the perfect regime. Madison’s work offers a rival vision: 55 delegates from geographically distinct areas arguing for 88 days to arrive at the best regime possible for the time.

Madison had learned from his study of the classical republics that popular governments eventually failed, as did federations of independent states. So his account emphasizes what is novel about the New World. Americans make liberty with justice the goal of self-government. In Plato’s Republic, liberty is not an essential value. The goal is to eliminate faction and produce justice with harmony. By contrast, the Founders did not seek harmony, but “a more perfect union”—not a perfect one, since that would be incompatible with human freedom.

Madison also shows Americans creating new institutions. In the British system, the powers of the social classes were separated, so that you had one branch of the legislature representing the upper class and another representing the lower class. In America, the people of the states are represented not through a “lower branch” and an “upper branch” and but a “first branch” (the House) and a “second branch” (the Senate).

If you bury Madison’s account in a set of scholarly references, or set it beside the contrary recollections of others, some of whom did not vote for the final draft—or if you call what Madison produced mere “notes”—you don’t capture Madison’s sense that something momentous happened at the Convention. Never before in the history of the world had so many people representing so many different localities and interests sat down to talk about self-government at such length.

Reading Plato’s Republic is a bit like reading drama—the characters of the people Socrates is conversing with are revealed as they try to define just government, and the conclusions they reach are surprising. Is this similar to the experience of reading Madison’s account of the Convention?

I think so. You have characters, conflict, rising action, climax, and resolution. At the back of my edition, I append a summary of the events, which I title “The Constitutional Convention: A Four-Act Drama.” I want readers to follow the dynamic of the debate. For example, the summary shows how during the first month—what I call Act I—conflicts between delegates arise as rival plans are presented, and a deadlock looms. During Act II, from late June to the end of July, a compromise is sketched out, but the final agreement could still be scuttled because of some sharply opposed interests.

So, up until the end of the process, the delegates were not sure they’d complete their task. What problems did the Framers have to overcome to reach agreement?

Well, unwillingness to compromise. When, where, and why do you compromise what you believe? And as a separate issue, to what extent do you let yourself be persuaded by the deliberation that takes place, rather than continuing to represent the wishes of the people who sent you?

Then, stamina was needed to get through 88 days of discussion in a closed, stuffy room in the heat of summer. And there was a generational difference. Those who were older, in their mid-forties and fifties, who were around at the signing of the Declaration, had grown more prudent and cautious. The younger ones, in their thirties—Madison, Hamilton, Gouverneur Morris—they were the ones willing to take a risk—along with Washington, who urged these younger people to get to the root of the problem; don’t just patch it up. There were serious sectional differences. For example, what do you do about slavery? Some threatened to walk out and abandon the process.

The first two acts of the drama involved exploring the possibilities; but in Acts III and IV decisions had to be made. Madison reveals the difficulty of principled negotiation.

It’s amazing that the outlines of a compromise emerged from the Gerry committee in just three days: from July 2 to July 5.

Yes, the breakthrough came during the Fourth of July recess. If you look at the composition of that committee, it was made up entirely of people who wanted to compromise. Madison was not on that committee!

Jefferson described the men who participated in the Convention as a group of “demi-gods.” Madison says they were “pure in their motives” and aimed to “secure the permanent liberty and happiness of their country.” Do you agree?

Something about the dynamic of the process brought out the best in them. They were more experienced, they’d read more and they understood what was at stake better than the average person. They understood they had to back off. But how easy is it for a demi-god back off?

At the end of June, Washington was in despair. Why can’t they find a solution? I think that if Washington had told the other delegates they must adopt one of the offered plans, they would have fallen in line. But he did not. Washington seemed to realize that the delegates had to go through all the hazards of negotiation until they reached a breakthrough.

All the way through individual delegates are thinking, “Well, there are certain parts I don’t like.” Then Franklin on the last day of the convention says, isn’t that what life is about? Isn’t it about striving for the best that is possible?

As he got older, people began referring to Madison as the “Father of the Constitution;” but he insisted that the Constitution was the work of many people. It’s the dynamic of people working together for the common good, but trying to protect their differing interests. They lose their tempers, and some walk out, but others stay the course. And don’t forget ratification, where you had 3000 people being elected to debate the proposed Constitution up and down the coast without a drop of blood being spilt. In no other country before had this happened.