“The words ‘All men are created equal’ have caused more consternation than any other words in our history,” says Skip L’Heureux, who teaches US history and government at Boothbay Region High School in Maine.  For L’Heureux, this consternation links our past to our present, showing an ongoing struggle to live into what we believe. “When students make connections” between the past and present, “they understand why they are learning history.”

L’Heureux teaches government from an historical perspective to sophomores and juniors at Booth Bay. The sophomore course, “Roots of American Government,” covers “the colonial era through the Civil War, putting most emphasis on the Constitution—why the government developed the way it did, how it developed, and how it was tested during the constitutional crisis of the Civil War,” L’Heureux says. The junior-level course “picks up at Reconstruction and goes however far we can get into the modern era.” In both courses, L’Heureux constantly points forward and backward in our history.

“Whatever I teach in the Revolutionary period I will bring up again later. If we’re talking about equal rights for Black Americans, I remind students how the British offered enslaved Blacks their freedom if they fought for the British.” Other enslaved people fought for the Patriots; “some were given their freedom, and some were not,” L’Heureux says. “This history is background for today.”

“Historically, Blacks have improved their situation by fighting in American wars. They’ve had to risk their lives to get their rights recognized. In World War I, Black soldiers were lauded by the French, but treated by our own army as if they were at best step-children.” But later, they invoked this war-time service to pressure President Franklin Roosevelt to remove racial barriers to defense industry jobs. Indignation at mistreatment suffered by Black veterans of World War II pushed President Truman to integrate the armed forces in 1948.

L’Heureux has been incorporating primary documents in his courses ever since he attended the Presidential Academy, an early Ashbrook program similar in approach to both the Master of Arts in American History and Government (MAHG) and the one-day and weekend seminars Teaching American History now offers around the country. Those programs typically use long document excerpts, immersing teachers in their context and scope. L’Heureux took these documents home and drew from them “my own excerpts with the focus I wanted.”

He used them extensively in the AP US History he once taught. As part of that course, students read a small packet of primary source documents every two weeks, afterwards logging into an online forum he designed. There he listed a premise about the history in the primary sources, asking students to argue in favor or against. “I knew it was working when I heard them in the hallway arguing with each other” about the premises they were debating online, L’Heureux said.

By this time, L’Heureux had enrolled in MAHG, after winning the James Madison Fellowship for Maine in 2013, which would fund his studies. In MAHG, he found what he’d always sought, an opportunity to talk history and government with others who care deeply about it. “I am not a social butterfly. I went through high school and college as a loner and did all my work by myself. But the camaraderie at the summer MAHG sessions was phenomenal. The first year, I stayed two weeks. I got to know the teachers I shared an apartment with better than some college roommates I lived a year with. You’re talking together inside and outside of classes, talking the same language about what makes you tick—what makes you a history geek. I felt, ‘I could stay in this environment forever!’” 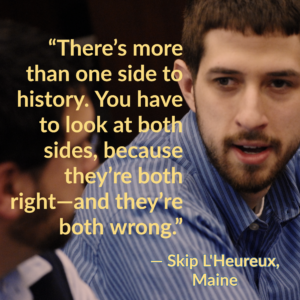 He made sure to complete all the reading for his coursework prior to arriving for the summer sessions, so that he could use his time in Ashland talking to other teachers and his professors. In MAHG, “you can have a different point of view with another person and not be crucified for it,” L’Heureux said. For example, he could talk with teachers in the MAHG program about provocative analogies he uses when teaching history, to spur student thinking. For example, when teaching the American Revolution, he conveys the perspective of the British by likening the American Patriots to terrorists. “The Sons of Liberty didn’t bomb buildings, but they were harassing the tax collectors and vandalizing homes; they were doing pretty much what terrorists do.” Using this analogy allows L’Heureux to make the point that “there’s more than one side to history. You have to look at both sides, because they’re both right—and they’re both wrong.”

Analogies also help students understand how practical issues distort moral choices. The reluctance of Southern slaveholders to give up the institution of slavery can be difficult for students to understand, not simply because of the injustice of the slaveowners’ position. Students do not immediately grasp the essentially feudal basis of Southern society.  Southern aristocrats calculated their wealth not in money, but in land and the slave work force itself. To help students understand this, L’Heureux compares the Southerners’ situation to that of Maine lobstermen today.

“If you’re a lobsterman, you always want a bigger boat. The bigger the boat, and the bigger the truck you use to transport your catch, the more successful you are. Anyone who takes those things away from you is infringing on your way of life.” Today, L’Heureux notes, the collapsing lobster population has caused officials to limit the number of lobstering licenses they issue. “You have some families who have been lobstering for generations. How are their children supposed to find their way in society? It’s not an exact parallel, but it’s something students can relate to so they can claim ownership of the history.”

Drawing connections between present and past experience works hand in hand with primary document study. Both ways of teaching illuminate the motives for human choices. “You use primary documents to show different perspectives,” L’Heureux notes. Students, he finds, usually “want to know both sides. There are always those on either extreme, but most of the kids are in the middle trying to find out what’s what.”

Combatting a Reluctance to Read

Teaching history as an opportunity to understand the world, L’Heureux pushes students to exercise their reading skills. But this effort grows more difficult, as the influence of technological media grows stronger. “Students can go on the internet and get a quick answer instead of a full answer—microwave knowledge instead of a full meal. On the internet, there are videos for everything”—from how to fix your car to how to understand historical events—“but a lot of that stuff is junk.”

Hence L’Heureux emphasizes the skills students need when using “a range of resources to learn things.” A key skill is discerning which resources are reliable. “If they’re gonna live on electronic devices, getting history from videos, they need to ask themselves, if it says Drunken History, can they really use that as a source?”

How You Know You Are Making a Difference

He does feel he is getting through to students. “I live in the town that I teach in,” L’Heureux says. “We have one grocery store in town. If you think you’re gonna go in there for five or ten minutes, you’re not, because somebody will stop and talk to you about their kid.” From time to time, “a parent comes up to me and says, ‘Hey! In class you were talking about such and such, and we actually had a dinnertime conversation about that!’ Most of these kids don’t have dinner with their families; they’ll eat in the car while on the way somewhere. So, it’s really something when parents come and report having a conversation over dinner. Sometimes, the students are educating their parents. 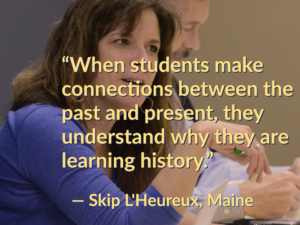 “If they are taking the material and talking about it outside of class, it got to them. Most of the time, the parents are thrilled.”

L’Heureux had a similar experience with his own five children. All of them dreaded taking their first course with him. “They all thought I would be harder on them than on other students. At the same time, they heard their friends saying, ‘Oh, you’re gonna get an A, because your father teaches the course.’” In fact, L’Heureux gave only one of his children an A, a daughter with a gift for history who would go on to study it in college. Nevertheless, “after they had me for their first class, all of my children made sure that they were scheduled for every other class I taught. They said I made history and government pertinent. I helped them see it meant something.”

An American-Soviet Face-off in 1961: Tanks in the Streets of Berlin