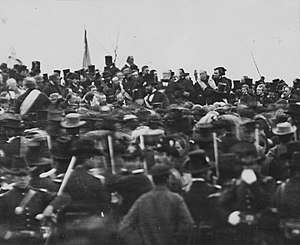 The previous installation of this blog focused on Lincoln’s view of the nature of the Civil War.  Looking at his 1862 letter to Horace Greeley, one may come to the conclusion that Lincoln’s only purpose was to preserve the Union.  There is more to the story, however.

Later that year, Lincoln issued the Preliminary Emancipation Proclamation.  In essence, this document declared that slaves held in the areas of rebellion would be freed upon the new year.  Some may say that this proves Lincoln sought emancipation as a war goal–a goal that was as important to him as the preservation of the Union.  Others may more cynically state that Lincoln had no desire to interfere with the institution of slavery.  He only meant to free certain slaves in order to speed the war’s end.  Therefore he was not dedicated to equality.  Both sides have their proponents and merits.

The study of another famous document that was produced after the Emancipation Proclamation was issued officially on January 1, 1863 may be instructive.  The Gettysburg Address is one of the most famous speeches in American–and perhaps world–history.  But what does it have to say about the issue of the nature of the war?

Have your students read this document carefully.  Does the Gettysburg Address tell us anything about Lincoln’s view of the nature of the war?  How does he frame the concept of “liberty”?    What does he mean by “new birth of freedom”?  Answering these questions may help shed a different light on the subject of Lincoln’s commitment to equality of the races.