Seminar Discussions Inspire a Teacher to Reevaluate the Founding

Derek Collins didn’t plan to teach history when he entered college. “I was going to be a businessman. But I didn’t enjoy my financial accounting classes.” So Collins switched plans: “I decided to coach high school sports, as my Dad had done for years.” A degree that prepared him to teach social studies would help him get a coaching job.

But there was another problem. The poor grades he’d made in the unappealing accounting classes at East Central University (in Ada, Oklahoma) barred him from entering the school of education there. “So I decided on an alternate route: to get a degree in history. That has actually worked out well for me,” Collins said. History, he found, was interesting. After college, he was hired to coach and teach 8th grade US history (covering Discovery and Settlement to Reconstruction) at the school he’d attended as a child, the K–12 Latta Public School just south of Ada. He was glad he’d spent time learning his content area.

Looking back thirteen years, Collins admitted, “At first, I taught so as to coach. But during the last ten years, I’ve felt a growing commitment to the teaching. I’ve realized that I can make a difference in kids’ lives by working with them in the classroom.” 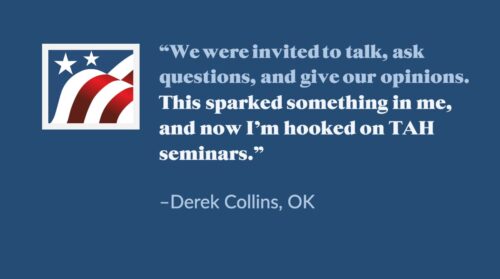 Still, “You can get in a rut, teaching the same things every year the same way,” Collins said. When a flyer from Teaching American History arrived in his mail, announcing several one-day seminars in Moore, Oklahoma, Collins was curious. He’d already been using TAH’s 50 Core Documents collection in his eighth grade American history class. He wondered what the seminar would entail. “If it was going to be six hours of sitting and listening to a university professor lecture, that would be rough,” Collins said. “But the seminar wasn’t like that at all. We were invited to talk, ask questions, and give our opinions. This sparked something in me, and now I’m hooked on TAH seminars.”

The program he’d signed up for, facilitated by Professor Jason Stevens of Ashland University, dealt with an issue his students often struggled with: slavery and the Constitution. If the founders believed all human beings are created equal, why did they permit slavery?

“I had taught the Declaration of Independence in the way it was taught to me: as our ‘break-up letter’ with Great Britain,” Collins said. He saw it as a list of complaints prefaced by dramatic rhetoric. “Reading and discussing the Declaration during the seminar, I realized it was so much more than that. Although the latter part of the document listed the founders’ very particular grievances with Great Britain, they meant for the first part to have a much broader meaning.

“The Declaration says that every person has the right to life, liberty, and the pursuit of happiness. The founders thought this applied not just to Americans, but to human beings everywhere. . . . They knew they were being hypocritical in allowing slavery to continue. You look at George Washington. He was so disturbed by this hypocrisy that he arranged in his will to free his slaves.”[1]

Delving Deeper into the Contradiction of the Founding

Early this school year, Collins learned he’d been accepted to a joint TAH/Liberty Fund weekend on Abraham Lincoln in Springfield, Illinois. “I really wanted to go and wondered if the $400 stipend would cover air travel.” Getting an affordable flight between the end of Friday classes and the evening reception opening the seminar would be difficult. He asked for a paid day off so that he could drive up, beginning the 9-hour journey on Thursday afternoon. “My principal said, ‘Hmm. We’ve never had a teacher do anything like this before.’” So Collins appealed to the district superintendent. “They loaned me a car for the drive up and paid for my gas!” Collins arrived in Springfield early and well rested.

Professor Jason Jividen (Saint Vincent’s College) led this seminar. Among documents discussed was Lincoln’s 1859 letter to a group of Bostonians who had invited him to speak at a celebration of Jefferson’s birthday. Unable to attend, Lincoln carefully composed a letter to be read in his absence. Despite Jefferson’s personal record as a slaveholder, Lincoln praised him for the bold truth of his writing:

All honor to Jefferson—to the man who, in the concrete pressure of a struggle for national independence by a single people, had the coolness, forecast, and capacity to introduce into a merely revolutionary document, an abstract truth, applicable to all men and all times, and so to embalm it there, that to-day, and in all coming days, it shall be a rebuke and a stumbling-block to the very harbingers of re-appearing tyranny and oppression.

Collins concluded that Lincoln’s interpretation of the founders accorded with what they themselves had said. They thought the Declaration stated the truth about human equality. Yet they did not know how to apply this truth to their situation. At the Constitutional Convention, Southern delegates would have walked out if other delegates had insisted on banning slavery. The new nation never would have gotten off the ground. Nevertheless, by proclaiming the principle of human equality, the founders set in motion a conflict that eventually led to slavery’s end. “I don’t know if I’m right,” Collins said. “But that’s what I think.”

Collins’ recognition of the founders’ dilemma over slavery is just one of the insights primary documents make possible. “At that first TAH seminar, Jason Stevens said, ‘You want to know what those who founded our country thought? Go to the primary documents!’ He’s absolutely right—the documents give you an unbiased view of what they thought and believed.”

Early in his teaching career, Collins stopped relying on the textbook, “except to provide a timeline of events. I work from a binder of primary documents.” The TAH seminars gave Collins many more documents to work with. “After attending my first one-day seminar, I had to get a larger binder. I’m now on my third binder, the biggest one I can find!”

Collins’ students have learned to search primary documents for answers to their questions. “Right now, we’re reading the Articles of Confederation,” Collins said. “We are talking about why that plan of government failed. My students asked, ‘Why would Americans opt at the Constitutional Convention for a stronger central government than the one they already had?’ I said, ‘Well, look at some of their own state constitutions.’ I downloaded the Virginia Constitution from TAH.org and asked them, ‘What do you notice?’ My students said, ‘Well, in Virginia, there are three branches of government.’ ‘Bingo!’ I said. The Articles of Confederation had only one branch, the legislature.” It lacked the system of divided powers and checks and balances that makes the federal government resilient.

Giving Students Ownership of the Discussion 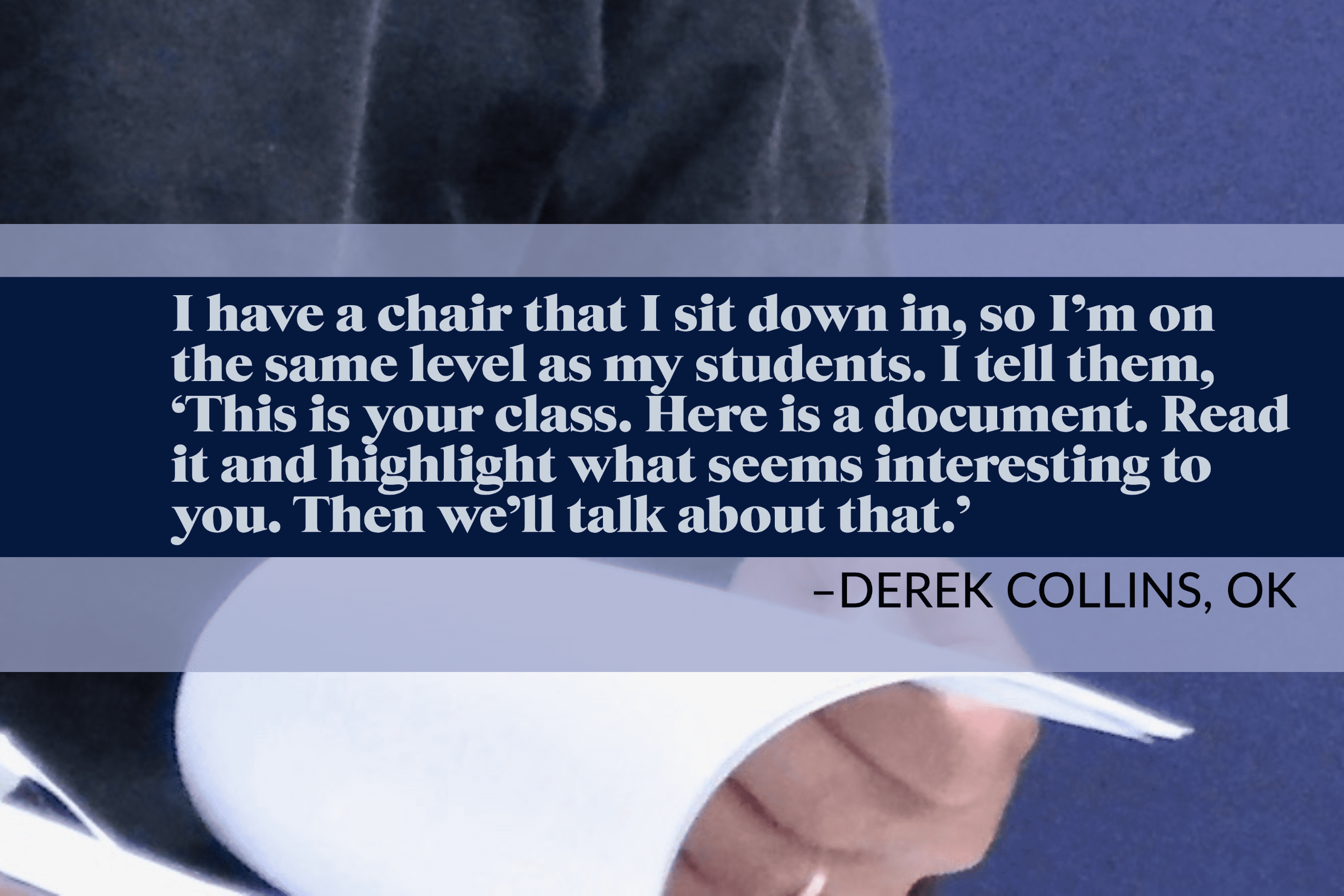 TAH seminars not only prompted Collins to use a wider collection of primary documents. They modeled a new teaching style. “I don’t teach from a podium anymore. I have a chair that I sit down in, so I’m on the same level as my students,” Collins said. “I tell them, ‘This is your class. Here is a document. Read it and highlight what seems interesting to you. Then we’ll talk about that.’ I think this prepares them to discuss the issues of government they’ll need to discuss with other citizens when they get older.”

Yet, by putting a rich collection of documents in front of his students, Collins plans for his students to learn certain fundamentals. “I want them to learn what our founders and other leaders who shaped our country really intended,” Collins says. They also need to study the founders’ failures. “How did we get to this point in history? It’s good for them to learn recent history, but they need to learn what brought us here. Many people today assume that what is obvious to us should have been obvious to older generations. They think that problems we have now addressed, such as slavery and the denial of civil rights to African Americans, could have been easily corrected two hundred years ago. Yet there are problems we’re dealing with today that later generations will shake their heads over—why didn’t we get it, and why didn’t we fix it?”

For Collins, learning history means learning about the temptations and pressures that caused earlier generations to commit injustices. It means realizing that it took both courage and political ingenuity to right these wrongs. For this reason, Collins objects to recent efforts to remove Confederate memorials. In front of students, he doesn’t state his opinion on this—or on any other political matter—unless they ask for it. If asked, he says, “I feel that is whitewashing our history. Erasing those reminders won’t make things okay.“

On another question students frequently put to him— “Why do I have to learn all this stuff about American history?” Collins has a ready answer: “Because we are still dealing with the legacy of the past. You will be dealing with it throughout your adult life.”

[1] The legal factors limiting this action of Washington illustrate the complications sometimes faced by those who wished to renounce slave ownership. Legally, Washington could free only the 123 slaves he owned, not the 153 his wife Martha had inherited from her first husband Richard Custis. Because many of his own slaves were married to Martha’s slaves, he stipulated they be emancipated after Martha’s death. Martha could not free the slaves she herself owned, because they were “dower slaves” who would revert to the Custis estate when she died, to be divided up among her grandchildren. Yet she could hasten the freeing of George’s slaves (and may have feared they would revolt if she did not). She signed the deed manumitting them a year and a half before she died.