Liz Schley teaches advanced placement and college preparatory government at Basha High School in Chandler, Arizona. She also teaches American history to a select group of eighth graders in an accelerated middle school program situated at Basha. In recent years, Schley has participated in about ten of Ashbrook’s Teaching American History (TAH) seminars, some of these brought to near where she lives in Arizona, others requiring her to travel to historical sites. She’s the kind of teacher who is constantly trying to up her game, and TAH seminars push her to learn American history in greater depth and detail than she had time for during her Bachelor and Master’s studies in education at Northern Arizona University.

Schley is also using what she learns in the seminars to help her renew her certification by the National Board for Professional Teaching Standards. (Not a job requirement, it’s a process supervised by an independent nonprofit through which highly motivated teachers reflect on, improve, and demonstrate their professional knowledge and skills.) TAH seminars model the study of history through primary documents—the firsthand accounts of those who lived in the past. How to teach students to read these documents is a problem Schley is addressing in the certification renewal process.

A conscientious student, Schley prepares for each seminar by reading the featured primary documents ahead of time, carefully annotating them with notes and questions. She shows her students how she does this. She researches and notes down biographical facts about the author of each document. She circles vocabulary words she doesn’t know, looks up the definitions, and notes the meanings in the margins of the document. Rereading the document, she notes questions about what the writer meant. She doesn’t note answers to those questions until she has discussed the document with other teachers in the seminar. 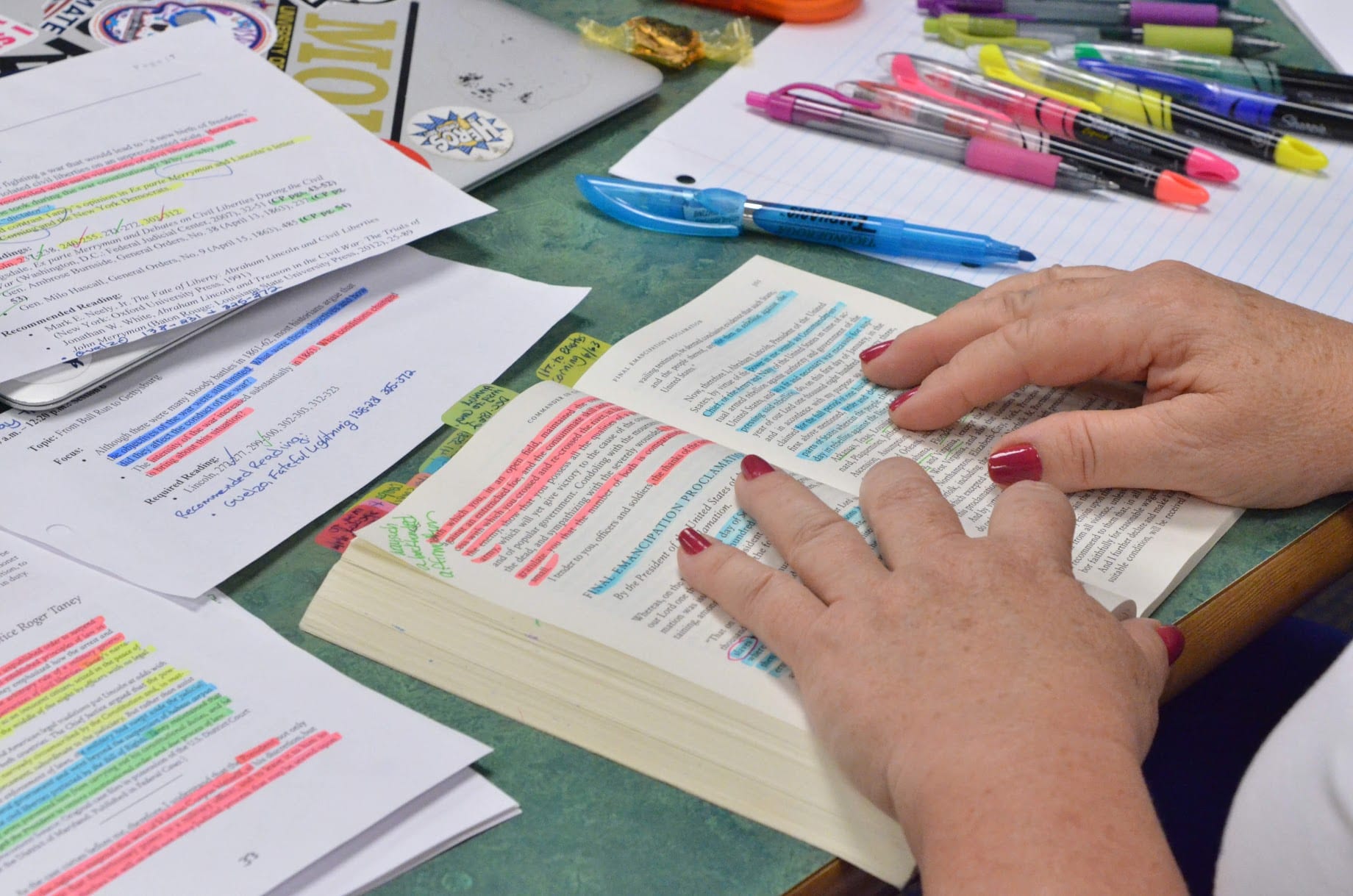 Schley teaches her students to also read documents multiple times, taking notes in layers, and to ask questions about passages they don’t understand. In the beginning of the year, she guides the class in annotating documents projected on screen. From there, the students progress to annotating in small groups, then finally to doing the work as homework assignments. Remembering how much she learns from the insights of other teachers during the TAH seminars, Schley encourages students to ask classmates how they interpret difficult passages.

Still, it was only this March—during a TAH discussion of civil rights led by professor Peter Myers—that an idea struck Schley. “Why am I not doing this sort of seminar with my students?”

The Guided, Yet Open-Ended Discussion

It wasn’t that she never asked students to discuss documents. She’d staged the kind exercise education professionals encourage, the so-called “Socratic discussion.” In these highly structured events, students are judged for every idea they volunteer. They sit in chairs arranged in two concentric circles. Students in the inner circle talk, while those in the outer circle watch and take notes. The teacher sits outside both groups with a sheet of questions and expected answers in her hand, grading students on their participation. “Each student knows he has to speak three times during the discussion. They also think that what they say has to be right. They know the teacher has an objective and will make sure the discussion gets there.”

Schley prefers the very different design of the TAH seminars. Although highly knowledgeable, the university professor who facilitates discussion does not dismiss “incorrect” opinions. Speaking of Professor Scott Yenor, who led a seminar on the Civil War, Schley said: “He guided us to do our own thinking. He’d ask us, ‘Why do you think what you’ve just said—can you point to a particular section of the document, or to other readings you’ve done?’” As teachers went back to the text to look for evidence, and as they listened to others who pointed to different evidence, they often revised their thinking.

In late March, Schley asked her eighth graders to engage in what she calls “academic discussions” of primary documents bearing on race relations. She explained they’d be practicing a new skill—how to listen to what others say, how to respond to their  ideas, and how to courteously disagree.

During the first discussion, on a pre-Civil War essay by Frederick Douglass, some students hesitated to talk, while others spoke without thinking, forgetting to anchor their comments in the text. Schley led students in a five-minute debrief, asking them to think about how they could make the next discussion better. Then she assigned Martin Luther King’s “Letter from Birmingham Jail.” King wrote the letter to a group of Birmingham pastors who had written him, criticizing him as an outsider interfering in their local concerns. Students read both letters and spent a week annotating King’s response. They’d also read King’s “I Have a Dream” speech in their English class. They came to the discussion well prepared.

As they talked about King’s argument with his critics, students pulled out sentences from the two letters. The local pastors called the demonstrations King led “unwise and untimely;” while King argued that “justice delayed is justice denied.” King cited the brutal treatment of demonstrators by Birmingham police as evidence of injustice, while the pastors seemed to view the police actions as a reasonable response to disorder. “It seems like what you already believe will affect how you see the violence in this case,” one student said, drawing a connection to today’s demonstrations over police use of lethal force.

Another student wondered whether today’s demonstrations and those of 1963 were really similar. King followed a careful process, she noted. “He talked about the four basic steps in any protest: ‘collection of the facts; negotiation; self-purification; direct action,’” she read. “I wonder if demonstrators today really [follow those first three steps] before they take direct action?” 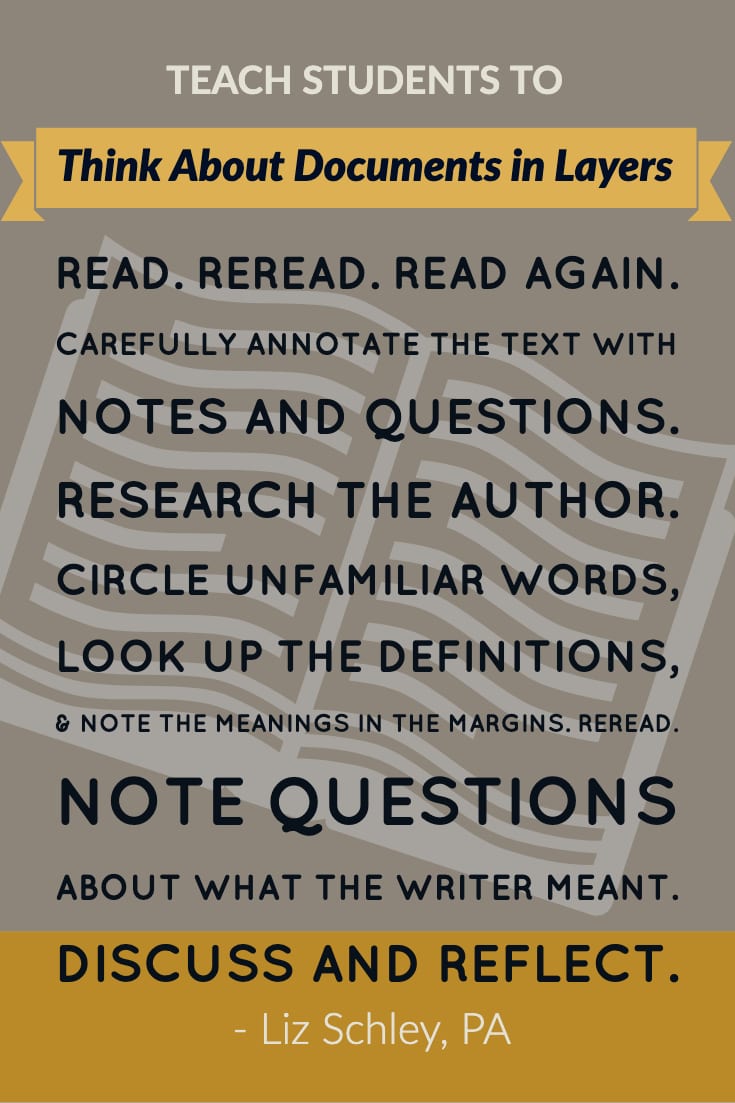 The conversation shifted to King’s argument that the church bore a responsibility to fight injustice. Students admitted they didn’t completely this argument. What did the church have to do with the problem of segregation? A classmate ventured that King saw the Bible’s teaching to “love your neighbor as yourself” as a judgment against white citizens’ unjust actions. Another quoted King comparing the early Christians, who challenged social conventions, with 1960s Christians who conformed to public opinion or hid from social problems “behind stained glass windows.”

One student pointed to a difficult passage. “What does King mean when he uses the words ‘divine law’ and ‘natural law’?” Schley reminded students that the Declaration of Independence cites the “law of Nature and of Nature’s God.” What did the terms mean there?

The bell rang—but before departing for lunch, students asked to continue the discussion in the next class period.

“It was one of those days when you’re saying, ‘They’re getting it! They understand!’” Schley said.

The students had followed King’s basic argument and related his activism to current problems in American life. They had admitted what they didn’t know, which led them to discuss deeper questions. Listening to both King’s text and each other as they discussed King’s words, they reached a deeper understanding than they would have as solitary readers.

The Power of Perspective

Later, Schley asked her students how primary documents differed from textbook accounts of history. Primary documents give “different people’s perspectives on history, instead of one simple summary,” a student said. Primary sources don’t display the opinions and “possible bias of the writer and publisher of the textbook,” said another. A classmate disagreed. “Primary sources actually contain more opinion than textbooks do”—they convey the attitudes of those who lived in the past and had to make decisions as events unfolded. To understand the larger historical picture, we have to “read between the lines,” compare different accounts, and reach our own conclusions about why things happened as they did.

Their observations recalled the earlier discussion of civil rights. Students had wondered why most white Southerners supported the Jim Crow system. King had brought that system to an end by reminding them of the American promise of equality that black citizens had been denied. Why had supporters of segregation not seen this before?

They had not seen things from the black citizens’ perspective, students concluded. King’s eloquent words, and TV images of the cruel treatment of nonviolent protesters, had awoken an empathy Southern whites had not allowed themselves to feel.

Primary documents carry a similar power. One student explained the difference between textbooks and primary sources this way: “My mom tells me about things my grandma did when she was younger. She gives me a summary of what she understood from my grandma. But when I visit my grandma and ask her to tell the same story, I hear more passion—I hear what she was trying to do when she lived through that. It paints a better picture.”

“Thank you,” Schley responded. “You all can pack up your books now.” There was no need to underline the conclusion the students had reached through conversation. They now grasped the real work of understanding history.