Invoking God While Respecting Freedom of Conscience: The Careful Speech of Our First Presidents

What did the religion clauses of the First Amendment mean to American leaders during the early republic? Rusty Eder, who teaches American history and government at West Nottingham Academy in Maryland, prompts students to ask this question in the lesson plans he wrote for his 2011 capstone project for the Master of Arts in American History and Government. Eder’s students examine key public statements of our first four presidents. These carefully composed, formal speeches—“as opposed to their letters to friends, which more likely expressed their personal religious feelings”—should “reveal how they interpreted the Constitution while holding the highest office for which it provides.”

Questions about the founders resonate at West Nottingham Academy, a private boarding and day school in the Maryland tidewater town of Colora. Opening in 1744, the school educated two signers of the Declaration of Independence: Benjamin Rush, a Pennsylvanian who became a friend and physician to John Adams, and Richard Stockton of New Jersey, who became Rush’s father-in-law. Yet despite the school’s eighteenth-century origins, most students arrive in Eder’s class sharing “the monolithic view of the founders’ religious principles held by most Americans today.”

They have heard the founders called Deists, and that Deists saw God as a creator who, having set the machinery of the world in motion, left it to run on its own. Hence, Eder’s students think the founders saw religious freedom as unproblematic. If God did not actively intervene in history—if humans alone shaped human fate—why would it matter whether or how citizens worshiped God?

Eder points out to students that, in fact, the Founders lived at a time much like today: Christians of different sects held a range of views. Indeed, this diversity of belief had provoked violent civil and international conflict in Europe. The founders’ decision to prohibit religious establishment and to allow free expression of religious faith arose in large measure from their determination to avoid the conflicts of the old world.

In speeches of Presidents Washington, Adams, Jefferson and Madison, Eder’s students look for references to a divine being. They ask why these presidents invoked God, and how they spoke of God without appearing to endorse a particular sectarian doctrine.

Of the first four presidents, students find George Washington “the most overtly religious.” But they note that Washington’s religious speech serves a practical purpose. In his Farewell Address, Washington argues that,

Of all the dispositions and habits which lead to political prosperity, Religion and morality are indispensable supports. In vain would that man claim the tribute of Patriotism who should labour to subvert these great Pillars of human happiness, these firmest props of the duties of Men and citizens. . . . Let it simply be asked where is the security for property, for reputation, for life, if the sense of religious obligation desert the oaths, which are the instruments of investigation in Courts of Justice? And let us with caution indulge the supposition that morality can be maintained without religion.

Students read John Adams’ Inaugural Address, which invokes Christianity “very positively,” Eder says. They also read a document whose bearing on Adams’ actual views could be overestimated: the Treaty of Tripoli. Attempting to end the menace of the Barbary pirates in North Africa (Muslim privateers who took hostages for ransom and, if not paid, sold them into slavery), Adams alludes to the First Amendment prohibition of religious establishment. Knowing that Muslim captors dealt more harshly with Christian prisoners, he wanted to remove religious impediments to the treaty:

As the Government of the United States of America is not, in any sense, founded on the Christian religion,—as it has in itself no character of enmity against the laws, religion, or tranquility, of Mussulmen,—and as the said States never entered into any war or act of hostility against any Mahometan nation, it is declared by the parties that no pretext arising from religious opinions shall ever produce an interruption of the harmony existing between the two countries.

Moving to President Thomas Jefferson, Eder’s students read a letter explaining his refusal to issue proclamations for days of prayer and fasting. Jefferson told the Reverend Samuel Miller that, “I consider the government of the United States as interdicted by the Constitution from intermeddling with religious institutions, their doctrines, discipline, or exercises.” Students also read Jefferson’s famous response to the Danbury Baptist Church, who had sent him a letter of congratulation on his election. To reassure the Baptists, dissenters from Anglican worship, Jefferson coined his famous assertion of “a wall of separation between Church and State.” Eder tells students, “Everyone wants to quote that letter, but few mention that two days after he sent it, Jefferson attended a sermon delivered in the halls of Congress by Elder John Leland, a well-known Baptist preacher. If that’s the wall, how tall was it, really?”

Among President James Madison’s official utterances, Eder’s students read his proclamation for days of prayer and fasting during the war of 1812. Eder notes Madison did this at the request of Congress, although, like Jefferson, he felt such proclamations were Constitutionally inappropriate.

What does this mixed record show? 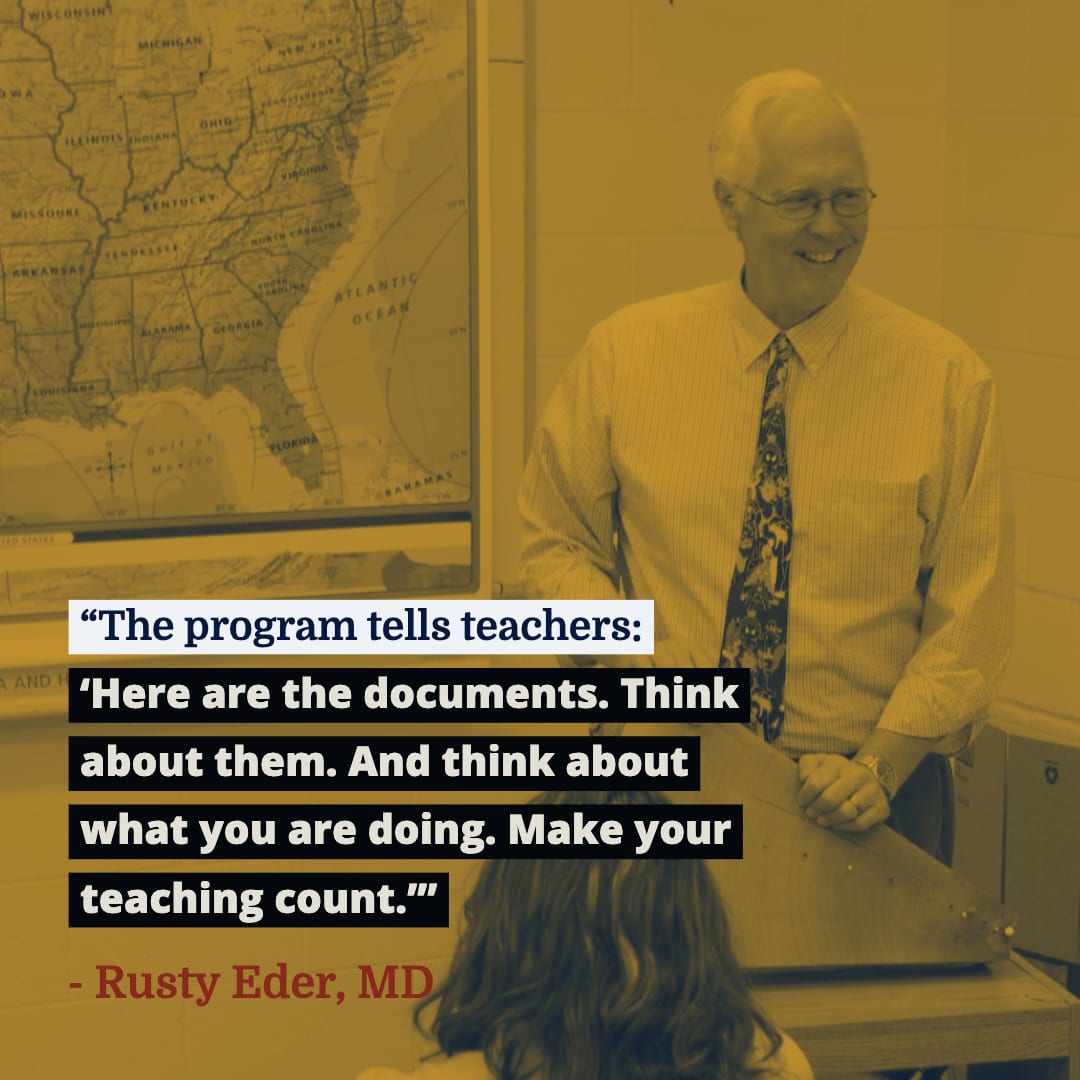 To help students reach a conclusion, Eder asks them to pick out the many names presidents assign to God. “Sometimes God is called ‘Divine Providence,’ sometimes ‘the Almighty Disposer of Events’ and sometimes merely ‘Heaven,’” Eder said. Each name invokes faith without assuming any particular theological view. Yet all, as Eder argues in the essay he wrote for his capstone, remind citizens that they need the blessings of God to survive and prosper as a nation.

Eder’s students do not always conclude, as Eder does, that our first presidents viewed such reminders as perfectly in keeping with the Constitution­—as long as they did not include instructions to seek God’s blessings in the church of a particular sect. “Kids can be hard-headed, saying, ‘Well, that’s just the style in which people of the time wrote.’ But such a style shows that faith was deeply woven into the society of the early republic.” By the end of the lesson—which Eder assigns early in the year—“students realize that everything is a little more complicated than they thought. This sets the tone for the document exploration that follows.”

When students read and analyze primary documents, Eder says, “they really learn—and they figure out how to learn—how to think critically.” The MAHG program gave Eder new primary resources for this kind of teaching, while pushing him to do his own analysis. It did not urge a particular reading of history, except in that it gave him a strong foundation in the Constitution and the views of the founders. “The MAHG program tells teachers: ‘Here are the documents. Think about them. And think about what you are doing. Make your teaching count.’”