In most high school classrooms, teachers pose questions, expecting correct answers. Something different happens in civics class, says Trish Everett. For the first time, students are asked for their opinions.

Everett, a graduate of the Master of Arts in American History and Government program, teaches AP Government, AP Psychology and an elective “Post-AP government” course at Pinecrest, a private, independent college-preparatory school in Fort Lauderdale, Florida. Her ambitious students “have gotten very good at figuring out what the right answer is. I try to help them break that habit.”

Of course, meaningful opinions are based on study and reflection. Everett makes this expectation clear. “I tell students that the responsibility is on them. If you read Article II, Section 1 of the Constitution tonight, we can talk about cool stuff tomorrow. You’ll already know that you have to be 35 years old to be president, so we can talk about whether that’s too young or too old; we can talk about how life expectancy has changed since they wrote the Constitution. But if you don’t read the assignment, I’ll have to spend time tomorrow telling you what it says. I’d rather hear you talk about whether 35 is too young or too old.”

The Classroom as a Microcosm of the Republic

Fortunately, Everett’s students are motivated. Government, like Psychology, is an elective course at Pinecrest. Students sign up for it because they grasp its relevance to their lives. Although just reaching voting age, they are already thinking about power and politics. They easily grasp the parallels between their classroom and larger political systems.

Explaining federalism, Everett says, “Suppose our principal doesn’t like the posters I hang on my classroom walls. Can he tell me to change them?” If students respond, “Well, the posters should be in line with the school’s mission,” Everett pushes the point further. “Can he tell me which students I can call on? Which homework I can assign? Can the teacher across the hall assign you homework?” After students reject those possibilities, Everett explains that they have just discussed jurisdiction.

Everett’s senior-level government students come to understand their classroom as a microcosm of republican government. After completing AP government, they may apply to enroll in the “post-AP” course. But to be fully admitted, they must complete the first day’s assignment: writing and signing their own social contract.

A Classroom Governed by Deliberation, Choice, and Consent 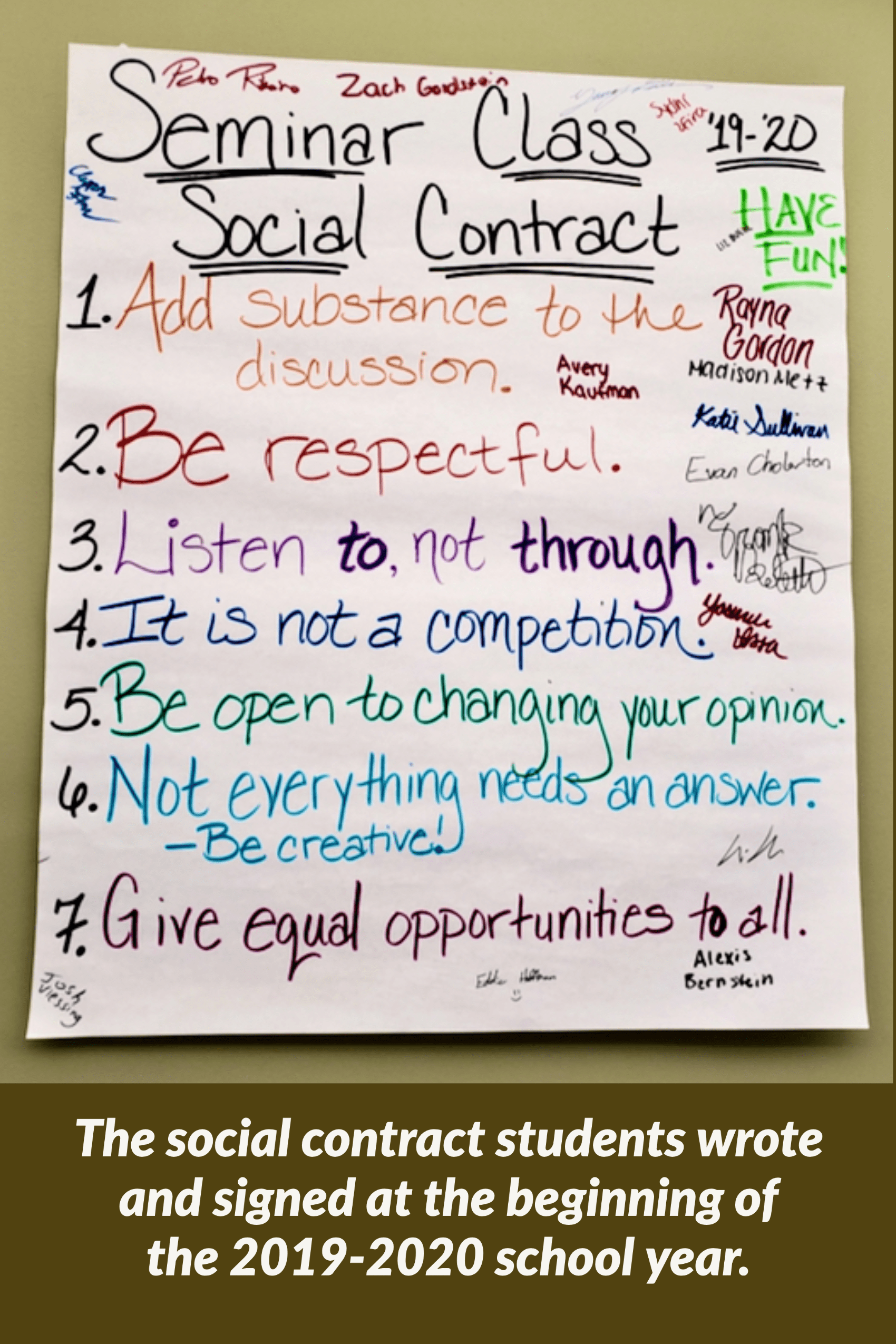 The exercise resembles a fast-tracked Constitutional Convention. Everett reminds students that the founders wrote the Constitution’s Preamble to announce their goals for government, then wrote seven articles to explain how their aspirations would become a reality. She asks students what classroom atmosphere they wish to establish: “You talking more, or me talking more? Lively shouting debate, or calm reasoned analysis? Do we do what Justice Breyer says the Supreme Court does in conference: nobody speaking a second time until everyone’s had a chance to speak the first time? It can be anything we want.”

She listens as students discuss their goals. Then she points them to blank poster paper hung around the room. They fill the posters with rules of behavior that promote their goals.

Next, students review and consolidate their ideas. On a fresh sheet of poster paper, they write five to seven articles. She urges them to include procedures to follow when a student breaks a rule.

“Say we’ve agreed to be respectful in both verbal and nonverbal communication. If someone rolls their eyes at another student’s comment, the student who got disrespected doesn’t have to wonder, ‘do I make a thing out if it or not?’ They simply say, ‘Hey, our social contract is hanging over there on the wall. It says we will apologize if we’re disrespectful.’” This minimizes angry confrontations.

Sometimes the contract includes student-authored slogans. Referring to their own tendency to restate points other classmates had already made, one group resolved to “Add, not multiply” when engaging in discussion. Hearing students struggle to articulate a rule, Everett may suggest a phrase from a recent professional development seminar. “Listen to, not through” signals an intention to listen to each other’s ideas, instead of waiting impatiently for a turn to speak.

After students finish writing their classroom constitution, Everett tells them, “I don’t want anyone in this class against their will. Each of you must consider whether you are willing to consent to the contract.” Students record their consent by signing the poster.

Everett began teaching the post-AP Government class in 2016, in response to a request from students who had just completed her AP Government course. A dramatic presidential election was unfolding; they wanted a forum in which to discuss it. Everett designed the course so that the discussion would be broader, engaging perennial issues in American politics. “We start by reviewing what we teach in AP—the philosophical basis for the American republic. We talk about classical republics vs. the natural rights philosophy of our founders.” Having reviewed the founders’ understanding of how self-government should work, students consider how it functions now, 250 years past the founding. Everett asks students, “Is the theory contradicted by what actually happens? Does the theory still provide a practical roadmap? If you feel that the current practice does not match the theory, what are you going to do about that?”

Everett’s students hold a range of political views, as she found in 2016, when she asked students to spend Election Day either supporting one of the presidential campaigns or working as trainee election polling site monitors, under the supervision of the ACLU. About a third of the class took the nonpartisan option; another third worked at a Republican phone bank, and the final third knocked on doors for Democrats. Such diversity underscores the importance of the social contract all sign.

The course allows students to develop their skills in the longstanding American pastime of political debate. During the first semester, students read Howard Fineman’s 2009 book, Thirteen American Arguments: Enduring Debates That Define and Inspire Our Country. Each chapter covers a particular debate—from  how Americans define citizenship and personhood to federalism, the national debt, stewardship of our natural resources, and the powers each branch of government should wield. Each student, working either solo or with a partner, chooses one chapter to study in depth. Then they spend a 45-minute class period teaching the chapter to their fellow students. 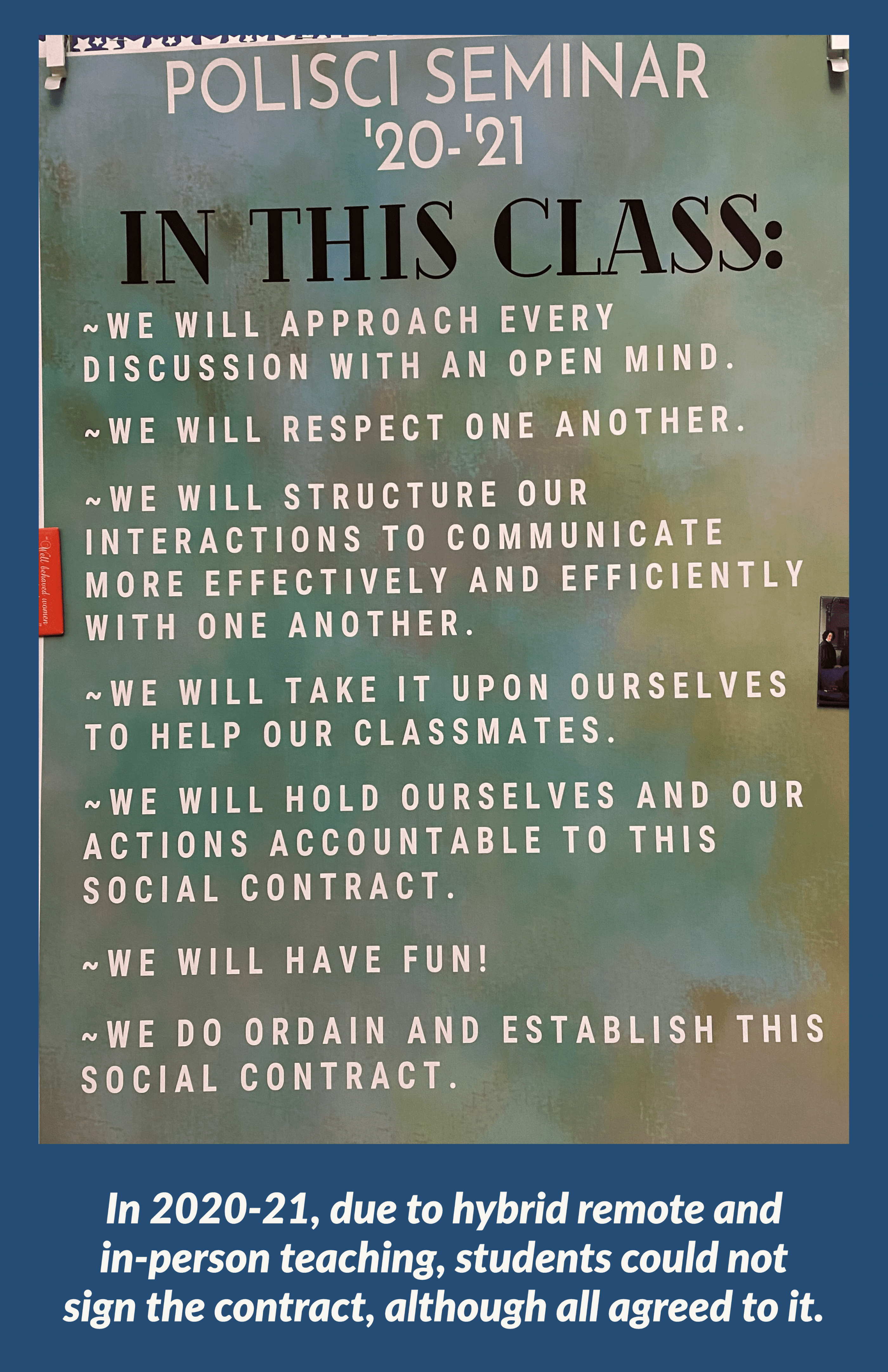 As students prepare to teach, Everett tells them, “if you are leading the class, you should be the one speaking least. I want you to ask questions that will get your classmates interested and talking. How can you phrase questions that won’t be dead ends?”

Such work in the first semester teaches Everett’s high-achieving students a new virtue: intellectual humility. It helps them collaborate productively as they prepare for a national competition that occurs during the second semester: the “We the People” program (Designed by the Center for Civic Education, the competition requires students to work in teams, preparing speeches that address Constitutional questions.) At the end of the year, they are ready to tackle a final project, in which they study a public problem, propose a solution, and begin testing the solution.

Everett views civic action as essential, while seeing political debate as action’s essential prerequisite. In such debate, “the point is not to win;” the point is to test and refine one’s ideas. No one has mapped all the paths that lead to justice. Likewise, no one is “the smartest person in the room in every single way. I know a lot of things, especially about the topic I’m teaching, but every single student in my classroom knows something I don’t—whether it’s how to replace a carburetor or how to do a triple jump on ice skates. I choose to learn from students as well as share with them what I know.” In the process, she models a disposition all citizens need: a willingness to learn from each other.