Today is the anniversary of Abraham Lincoln’s death. Instead of a story about Lincoln, we’re posting a story about a teacher who, each year in history class, tears the great president down to human size—so as to help students grasp his greatness.

Royce Aldridge admits to a “hero-worship” of Lincoln. As a teacher at Yerington High School in Nevada, he hopes to share his enthusiasm; yet he also wants students to see even the best of American leaders as “flawed human beings doing the best they can—and isn’t that what we all hope to achieve?” Americans revere Lincoln because he ended slavery, kept the Union together, and treated both his friends and foes with generosity and forgiveness. Aldridge admires Lincoln because of his principled decision-making and ability to intuit how others would respond to his actions. He also admires him for paying attention to the counsel of others, thinking deeply, and expanding his understanding of the moment in history in which he found himself.

When Aldridge begins teaching about Lincoln, “I first try to tear him down to a human level. I say, ‘Look at this gaunt man with rudimentary education. Why would we ever put him on such a pedestal?’” Some students nod in agreement. Others protest. “Eventually, one of the kids will call me out. When you look at my classroom, there are more pictures of Lincoln on the walls than of anything else.

“Then we start building Lincoln back up. We read excerpts of the Lincoln-Douglas debates. We look at the five preceding presidents, none of whom was reelected even though none dared to touch the slavery issue. Then we look at the election of 1860 and Lincoln’s first days in office. I say, ‘If things go to pieces, Lincoln will go down as the worst president in US history: the guy who ripped the country in half! So, let’s talk about the decisions he has to make. Should he resupply Ft. Sumter?” 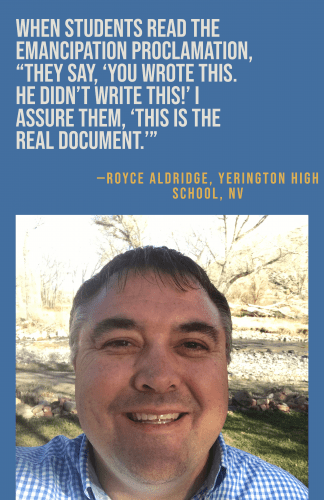 By the time students read Lincoln’s Emancipation Proclamation, they think so well of him that that they can’t believe Lincoln wrote the provision allowing any state that came back to the union before January 1, 1863 to keep its slaves. “You wrote this,” they say to Aldridge, “he didn’t write this!” Aldridge assures them, “This is the real document.” Then he explains the political context. Union forces had won few victories, and casualties were shockingly high. Irish Americans opposed to the draft rioted in New York City. Still, Lincoln decided to emancipate the slaves in the rebelling states, telling them, “This will be your punishment if you don’t rejoin the union. And he knew they wouldn’t,” Aldridge says.

He continues, always putting Lincoln’s decision-making in context. Lincoln proposed the 13th Amendment after asking Frederick Douglass’s advice—and after the win at Gettysburg. “For someone who had not even thought about emancipation three years earlier, to now ask for a constitutional amendment emancipating all the slaves was a huge evolution. Can you imagine the political pressure he felt while rounding up the votes for it?”

Read more about Aldridge—how he came to his vocation, and  how his father challenged him to read the text of the Constitution.

Documents and Debates: The Nullification Crisis

The Case that Defined the School Desegregation Remedy