Professor Ken Masugi has edited a new core document collection, the first in a planned series on the Supreme Court. Religious Liberty: Core Court Cases presents Supreme Court jurisprudence on the first guarantee of the Bill of Rights: freedom of religion, “the key element of republican citizenship,” according to Masugi.

The conviction that human beings are endowed with free minds, and that their innermost beliefs can never be dictated by government, underlies all American freedoms. Nevertheless, this axiom of American liberty has coexisted since the time of the founding with the opinion, as expressed by President Washington in his Farewell Address, that “Religion and Morality are indispensable supports” to republican government. As Masugi explains in the interview below, legal questions arising from the tension between these two ideas did not enter Supreme Court jurisprudence until the latter part of the 19th century.

Before discussing the reasons for this, Masugi explained his purposes in selecting the excerpts collected in the volume.

How does this core document collection differ from other anthologies of Supreme Court cases?

What we have tried to do is not simply collect the most important opinions, as a law school “casebook” might, but to excerpt key cases reflecting important arguments that high school students—young citizens—ought to reflect on. That means developing a skill that is hard to come by for many students of government and politics: namely, seeing that strong arguments exist on both sides of controversial issues. And that there are often more than just two sides.

To keep this book at a reasonable length for its purposes, we sometimes use only excerpts of the majority opinion or, later in the book, only excerpts of the dissent—although an online link to the whole opinion is provided. I am confident that the collection presents the major judicial approaches to interpreting the religion clauses.We recommend starting the book from the most recent cases, since reading them will reveal why the earlier cases are significant.  Our study questions should help guide the teacher and student. I have my own perspective on the jurisprudence on religious liberty, as will become clear as we keep talking. Yet I hope readers of the book will be able to construct arguments for or against the views I hold.

The first Supreme Court ruling excerpted in your collection was written in 1879. The second was written in 1943. You write that the Court did not begin applying the First Amendment’s establishment and free exercise clauses “to state and local laws until the mid-twentieth century.” Why did such cases not arise sooner?

We should keep in mind that the Court comes to examine these issues after religious pluralism becomes accepted, at least more so than at the founding. Even so, from the beginning of the republic the founding principles of equality and liberty promoted a generous understanding of religious freedom, as we see in Washington’s notable letter to the Hebrew congregation in Newport. Most religious groups, from the Jews of Rhode Island to the Baptists of Danbury, Connecticut to the Moravians of Salem, North Carolina were able to worship and even organize faith-based communities without interference. 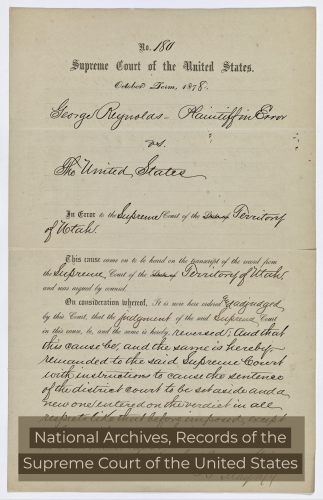 Still, many Americans regarded at least one group, the Mormons, with suspicion and hostility, even directing violence against them. Their practice of plural marriage affronted Judeo-Christian morality and violated State and federal laws prohibiting bigamy. This led to the Court’s earliest ruling on the first amendment guarantee of free exercise. It tested whether Mormon polygamy was permitted under federal regulations on marriage in the territories. In 1879 the Court stood by the centuries-old understanding of marriage, ruling that religious freedom was bounded by basic legal traditions embodied in the common law.

The next cases that arose concerned religious practices that conflicted with the social customs of the larger community in the workplace, in commerce, or in schools—in particular, Sabbath observance on days other than Sunday. In these cases the Court tended to grant minority claims. After 1938, the Court,  citing the 14th amendment, acted to protect what it would identify as “discrete and insular minorities” who allegedly were being oppressed by democratic majorities and unable to defend their rights at the ballot box. Race was one obvious category, but the Court wanted to defend religious minorities as well. This led to a kind of trump card that religious minorities could play against certain employment, Sunday closing, and school attendance laws.

This conceit led the Court to inflict its judgments against common practices such as the pledge of allegiance (1943) and later voluntary prayer and even moments of silence, and not only in the classroom but in commencement exercises, after-school-hours use of classrooms, and even pep rallies before high school football games. These practices were said to be establishments of religion. Thus dissenters on religion and in other aspects of life, (including those often held in private), came to have a veto over community practices. We also see this concerning views of sex, for example. So, in the name of protecting religious freedom, the Court created political controversy over widespread traditions. Of course such prayers continue in many public high schools, as the dissenting justices predicted they would. The Court extended itself beyond its proper place in the polity.

Some opinions of the Supreme Court have maintained that the establishment clause and the free exercise clause are “frequently in tension,” yet with “play in the joints.” Is the first amendment actually incoherent? Does it set the prohibition on establishment of an official church against free exercise of religion?

Here it’s important to recall the language of the First Amendment: “Congress shall make no law respecting an establishment of religion, or prohibiting the free exercise thereof….”  First of all, and this is a point Justice Thomas makes in many of his 14th amendment opinions, the Bill of Rights was originally intended to restrict actions of the federal government only. It was not intended to limit state support of religion, even tax support of particular sects. Such state laws would disappear by the 1830s due to the widespread belief in “equal protection” for all religions. As Federalist #51 argued, political freedom in the new republic would parallel religious freedom. And each would mutually reinforce one another.

Beginning in the late 1940s and continuing through the early 2000s, the Court, led by Justices Black, Brennan, Stevens, and Souter, declared that the establishment clause was designed not just to guarantee equal protection of all religions but to prohibit preference for religion in general. Policies or institutions deemed religious could not be supported by taxpayer funds, for that would mean an establishment of religion. So, religious schools could not receive federal aid to supplement salaries—but might receive it to construct buildings or buy textbooks. The Court began making specious distinctions between what could and could not be done with federal or state dollars in our bureaucratic age.

In this bloated view of the establishment clause, free exercise of religion became constricted to freedom to worship—that is, to religion only as practiced within a place of worship. This understanding of religion is far narrower than that of the founders, who acknowledged a public square full of Christians (not to mention Jews) openly professing a range of sectarian beliefs and organizing their lives in accordance with those beliefs.

Those who have objected to the currently ascendant constitutional argument, most notably Justice Scalia, base their viewpoint on tradition and practice. Free exercise cannot extend to establishing an official church via the ballot box, but no religion is being imposed on anyone by Christmas decorations in a city hall. Justice Thomas would make non-coercion the standard for both establishment and free exercise. There is no right not to be offended by others’, even the majority’s, religious beliefs. Only if state coercion comes into play is there a constitutional case against a state practice concerning religion.

Justice Kagan has spoken eloquently against this majoritarian view and argued for the importance of opposing official endorsements of religion in civic practices and memorials such as public architecture. Her arguments leave certain questions unanswered. Does a cross commemorating fallen veterans violate the first amendment? Does the constitutionality of such a memorial rest on when it was built, whether just after World War I or just last year? Must justices become psychoanalysts of the legislative process?

These recent rulings bring to mind Washington’s comments in his Farewell Address linking religion and morality and calling them “indispensable supports” of self-government. Judging by their arguments and rhetoric, many influential Americans have shared Washington’s view. How might the precedents on religious liberty differ if justices took Washington’s views into account?

The Justices are generally not great historians, and often they seem to read history backward, in order to justify their views today. Contrast Justices Souter and Rehnquist, for example, on their readings of historical practice. You are correct to single out George Washington, as does constitutional scholar Philip Munoz. I believe Washington’s views were held by the Court until the 1920s, when the Progressive view of American history began denigrating the founders as more concerned with their personal economic interests than with the public good.

Justice Stevens ignored history when he argued that the founders could not imagine Quakers, Jews, or Catholics enjoying the same religious freedom enjoyed by Protestants. We did not need to wait for Vatican II to see religious liberty extended to Catholics. (Chief Justice Taney was Catholic, and there were politically prominent Catholics at the time of the founding, such as the Carroll family.) 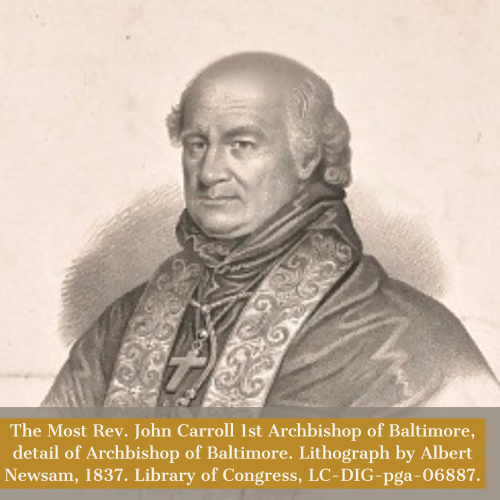 More recently, Justice Souter would deny any authority to the founders, for their world is long past. Such an argument ignores recent Presidents’ references to God in their official messages to Congress and the American people. Are these unconstitutional too? Some justices dismiss such rhetoric as “secular Deism” or merely “ceremonial.”

Over the years, justices have attempted to elaborate guidelines for determining violations of the religion clauses of the First Amendment. Do you find any particular guideline or approach more workable than others?

The best guideline is for all our government and civic institutions to respect the capacity of American citizens for freedom—our ability, whether in religion, the economy or in other human endeavors, to exercise our rights sensibly. Having a right to religious liberty is not merely having a power; it does not mean one is free to behave like a jerk. The individualistic world that some 20th and 21st century justices (along with the greater culture) have promoted has undermined the sense of shared civic life we need for patriotism and common citizenship. A single eccentric sets the guidelines for all. A merely private notion of religion destroys commonality.

Just as we who live in the bureaucratic age should be more skeptical of governance by executive regulation, so should we be more skeptical of judicial rulings. Reading the justices’ own words, students will see how some justices have presented outrageous understandings of America that became prevailing legal doctrine. This should help them become more thoughtful and more vigilant citizens.

Finally, reflecting more calmly and deeply, cannot we Americans acknowledge that being human entails some kind of spiritual experience? Can we not then find in the holidays of Thanksgiving, Memorial Day, Martin Luther King Day—and yes, in the spirit of Christmas and Hanukkah—the rational basis for community, liberality, charity, and conscience that define the best in common citizenship?