The Timing of Al Gore’s Concession in 2000

Election night on November 7, 2000, was confusing, especially for the press.  The Associated Press and television networks first called Florida for Vice President Al Gore and then retracted that call two hours later. Well after midnight, the television networks then called Florida (and with it the presidency) for Texas Governor George W. Bush, and then several hours later – still before morning – retracted that projection.  Somewhere along the way, Gore called Bush twice, once to concede and once to retract that concession.

Bush’s apparent victory margin in Florida was thin, just under 1800 votes, well within the half of a percentage point that would trigger an automatic statewide machine recount. Gore’s chief campaign manager announced, “the campaign continues.”

On November 9th, Gore requested an additional hand recount in four counties, which was allowed under Florida law. These counties, predictably, were Gore friendly counties: Broward, Miami Dade, Palm Beach, and Volusia. On this day, it became clear that Gore had won the national popular vote.

Democrats also pointed to irregularities in Palm Beach’s “butterfly” ballot, and these irregularities seemed to cause some Gore supporters to accidently vote for Reform Party candidate Pat Buchanan. In the end, this controversy did not continue through the end of the contest. It may have temporarily helped in the court of public opinion, but any benefit was undermined by the later news that Democrats in Palm Beach had designed the ballot.

Meanwhile, Florida Secretary of State Katherine Harris, a Republican, announced that she would not extend Florida’s deadline to certify the results and that hand counted tallies would not be included.  That deadline was November 14th.  At this point, Bush and Republicans wanted the vote certified, while Gore and Democrats did not.

The machine recount ended on the next day, November 10th, with Bush winning, but now by a lead of 327 votes. This lead would grow to 930 the next week when absentee ballots arrived and were counted.

The Contest Enters the Courts, as Hand Recounts Go Forward

In the meantime, Gore gained votes in the Broward recount, but Palm Beach and Miami-Dade counties decided they could not complete their recounts in time.  In Miami-Dade, election officials decided to count only “undervotes,” ballots where no vote had been recorded.  On November 26th, Florida Secretary of State Harris certified Bush’s victory, thus resisting Democratic calls to further extend the deadline, and on the next day Gore filed an official request to contest those results.

On December 4th, the Supreme Court remanded the November 21 ruling of Florida’s Supreme Court back to that court for reconsideration.  Specifically, the higher court wondered whether the Florida court had based its ruling on the Florida constitution rather than on Florida statute. On the same day, a Florida judge rejected Gore’s request to contest the election on the grounds that Gore had no reasonable path to victory.

But this was not the end.  Gore appealed to the Florida Supreme Court, and, on December 8th, that court gave Gore the victory he had long sought: in a four to three decision, appealing to Florida statute, the majority ruled that every undervote in Florida had to be recounted. Meanwhile, on the same day, the Republican Florida legislature convened for a special session, just in case their services in selecting a slate of Electors were needed. Republicans feared that Democratic election officials would manipulate undervotes in a way favorable to Gore. 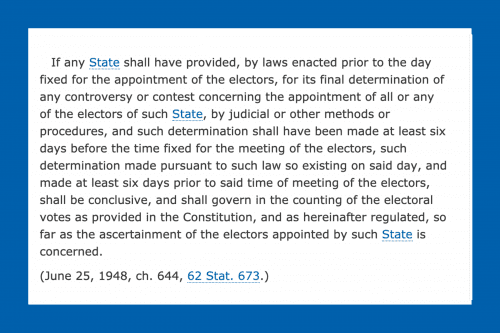 On the next day, the US Supreme Court ordered that this recount stop until that court could consider Bush’s appeal of the Florida court’s ruling.  On December 12th, in Bush v. Gore, the US Supreme Court ended the legal controversy.  Seven justices ruled that the recount presented constitutional problems by recounting some votes instead of others, and five justices ruled that these problems could not be surmounted in time for Florida to meet the “safe harbor” date required under US law.  Under a law passed in 1948, the states must make their “final determination” of Electors at least six days before Electors meet. Electors meet on the first Monday after the second Wednesday in December. In 2000, that safe harbor date was December 12th. [Editors’ note: This year, in 2020, the safe harbor date was Tuesday, December 8.]

Gore Accepts the “Finality of the Outcome”

In a televised address one day later, on December 13th, Gore “accepted the finality of the outcome” of the Supreme Court decision and “offered his concession.” On January 6, 2001, in his role as vice-president, Gore presided over the counting of the Electoral College votes before both chambers of Congress, thus constitutionalizing Bush as the winner. 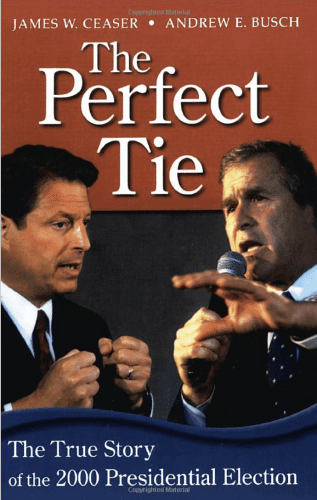 And what of the media’s role in calling the election?  It should be mentioned that a consortium of major media companies examined what would have happened if Gore had won in court and the recount continued, releasing their findings in fall of 2001. By their findings, a recount of undervotes, performed under the standard requested by Gore, would still have resulted in a Bush victory.  That is, the Supreme Court did not “decide” the election of 2000.  Ironically, the media consortium found that Gore could have won had he pursued a recount strategy based on “overvotes” (that is, on ballots on which more than one candidate for President was marked) instead of undervotes, but this strategy was never pursued.

Note: This summary benefited from two books, The Perfect Tie: The True Story of the 2000 Presidential Election, by James W. Ceaser and Andrew E. Busch, as well as The Vote: Bush, Gore, & the Supreme Court, edited by Cass R. Sunstein and Richard A. Epstein.

No Less Than a Miracle

Madison and Jefferson Discuss the Bill of Rights