Teachers attending Teaching American History programs find new colleagues—educators who may live far away, yet care just as deeply about educating young citizens. Such colleagues are huge assets for working teachers. They point out new resources, share teaching strategies, and deepen each other’s thinking about history and government. Many teachers go out of their way to sustain the new friendships. 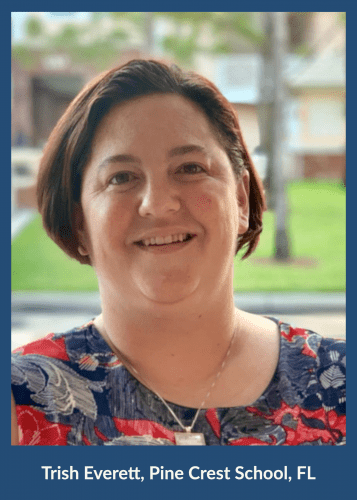 “I actively communicate with a lot of people I met in the MAHG (Master of Arts in American History and Government) program,” says Trish Everett, who completed her MAHG degree in 2014. “Sometimes we exchange recipes or recommend movies; sometimes we share classroom resources and arrange for our students to interact directly.” Everett teaches AP Psychology, AP US Government, and a “Post-AP” government course she herself designed at Pine Crest School, a private independent K-12 school in Fort Lauderdale, Florida. Recently, Everett’s friend Amy Parker, a 2016 MAHG graduate who teaches middle school social studies at the Creative Learning Academy in Pensacola, Florida, reached out to Everett for help with a special project. You might wonder how 8th grade American history students—who are just now learning the nuts and bolts of the Constitution—can collaborate with 12th graders in a second year of advanced government studies. Unless you are Amy Parker and Trish Everett. “We both embrace fostering conversation, putting the social in social studies,” Everett said.

Preparing to Recommend a Change in Law

In February, Parker reached out to Everett, explaining that she had arranged a meeting between her 8th grade students and their state representative. Parker’s students had been studying the presidential election process. They’d tossed around an idea for amending the way presidential electors are selected in Florida, and they had a recommendation to make.

Meanwhile, as Parker knew, Everett’s seniors were participating in the annual “We the People” competition—in which students make carefully researched speeches on questions concerning Constitutional interpretation. She knew they watched each other practice their presentations, growing adept at offering constructive criticism. Parker asked if Everett’s students would give her 8th graders similar feedback, prior to their meeting with the state representative. Everett put the request to her students. “They were super excited to help out the 8th graders. 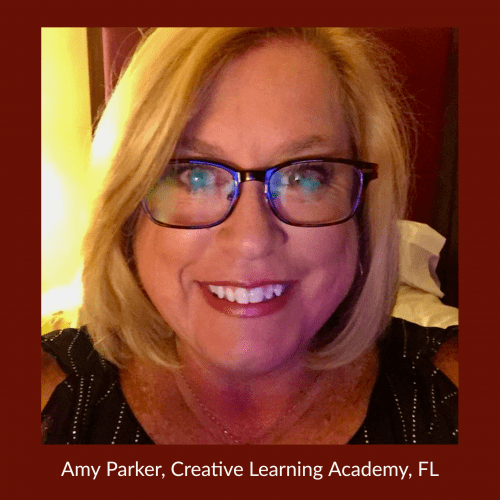 “Ideally, we would have been able to do it live, but because Amy teaches in the panhandle, there was a time gap. So, Amy recorded her students’ presentation and sent it to me. I showed the video to my students, after first creating a Google Doc on which they could record their compliments, critiques, and suggestions while they watched. Then we recorded a video with some verbal feedback.”

Parker’s students proposed changing the way Florida selects electors for the Electoral College. They were intrigued by the system used in two states, Maine and Nebraska. Instead of “winner take all”—assigning all of the states’ electors to the candidate with a majority of the popular vote—these states divide their electoral votes according to the number of popular votes for each candidate. Most of Parker’s students thought Florida should do the same.

As Everett’s students watched the presentation, they noted things the  graders did well: “Engaging introduction,” one wrote. “Love the map visuals!” another commented. Parker’s students showed two slides during their presentation. One showed how the Electoral College vote split between blue and red states in the 2020 election, resulting in a decisive victory for Biden. A second map gave a different perspective, showing many states diagonally striped both blue and red. In these states, the margin of victory for the winning candidate was narrow. The students computed the number of Electoral College votes the winning candidate would have received if all states followed the system used in Maine and Nebraska. Biden would have won, but by a much narrower margin. 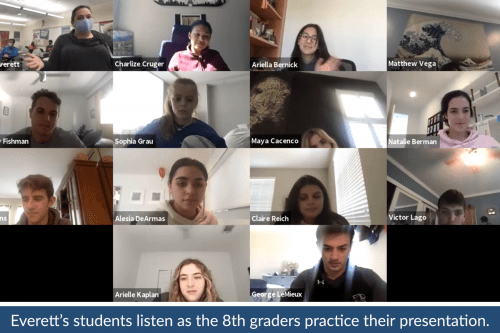 The 12th graders also offered a “to-do” list of possible improvements, some on the 8th graders’ speaking skills. Most of Parker’s  graders are studying on-site during the pandemic; while speaking to the camera, they had to project their voices through cloth masks. “Try speaking a little louder and clearer,” one 12th grader said, acknowledging the challenge presented by the masks. “Try to read less from your script,” another said.

The Pine Crest students also commented on the 8th graders’ argument. The 8th graders had pointed out that dropping the winner-take-all system might encourage candidates to campaign more in populous states like California; might it also discourage candidates from campaigning in small states with few electoral votes? Would smaller states lose influence in national politics? “I recommend the class go over Federalist #10, one 12th grader said, recalling Madison’s worry about majority factions that grow tyrannous. A winner-take-all system silences the voices of minority factions. Another student advised the 8th graders to “really emphasize” a good argument they’d made: that their proposal represented a compromise between those who would discard and those who would preserve the Electoral College.

How the State Representative Responded

Parker’s students recorded their practice session on a Monday. Everett’s students watched and commented on it the next day, and Everett immediately shared the Google document with Parker. Her 8th graders read the feedback and reworked their presentation on Wednesday, then spoke with Representative Alex Andrade via Zoom on Thursday. Andrade listened intently, then asked the students questions.

He asked what problems might result from an electoral process that could result in narrow margins of victory. What about an Electoral College tie? The 8th graders said the Constitution provided a solution for that. Any election too close for certainty would be decided in the House of Representatives. The decision would be democratic, they said, since Congressmen are popularly elected from Congressional districts roughly equal in size.

Andrade asked whether a President chosen in the House might feel “beholden” to Congress. He thought the students’ proposal would move the US closer to the system of Great Britain, where the Prime Minister is selected by members of Parliament.

In the end, Andrade gave Parker’s students a kindly “No.” He told them he sees the Electoral College as part of a complex system devised by the founders to prevent tyranny. The founders divided power among the federal branches of government as well as among the national, state, and county levels. “The beauty of our system is that it’s so confusing, and enfranchises so many different people, that it makes it nearly impossible for anyone to consolidate enough power to really hurt” other citizens, he said.

Afterwards, Parker’s class recorded a thank-you message for Everett’s students. Parker asked her students how they felt the presentation had gone. One student, whose research had inspired the class to work up the proposal, expressed disappointment that Andrade “didn’t like our idea. But I appreciate that he didn’t talk to us like children,” she said. “He did a good job of defending his views.” Other students agreed, saying that debating with the representative was fun. “We had answers to what he said,” a student commented. 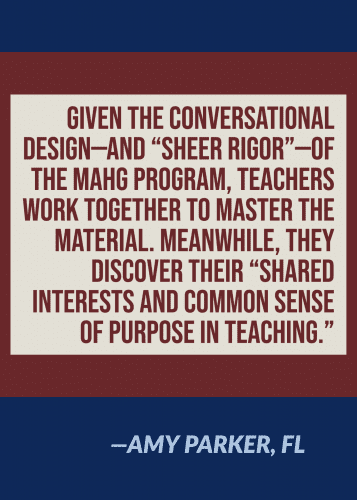 “A lot of the objections and questions that he raised, you guys pointed out in your critique,” Parker told the Pine Crest students. “I hope that you guys will have a project that we can assess and talk about. Let’s keep this communication going.”

Everett said her students “really felt important that they got to be helpful” to the 8th graders at the Creative Learning Academy. “I would love for Parker’s kids to have the ownership of telling my kids what they can do better.” Her students will soon begin a research and design project. Each will study a little-understood aspect of government and create a product—a report, infographic, children’s book, song lyrics, or etc.—to teach the public about it. Parker’s class will serve as their first test audience. “They are thrilled to collaborate with Pine Crest again. It’s given them a boost of confidence at just the right time—when they are nervous about entering high school next year,” Parker said.

How did the MAHG program lead to this classroom exchange?  MAHG seminars are conversations among students and professors based on intensive reading of primary documents. Given the conversational design—and “sheer rigor”—of the program, Parker said, teachers work together to master the material. Meanwhile, they discover their “shared interests and common sense of purpose in teaching.” Naturally, they continue sharing ideas after the program ends. Having learned so much from each other, Everett added, MAHG grads often want to build similar relationships among their students. Doing so, they strengthen the bonds needed to connect young citizens in the more perfect union the founders hoped for.