Forgotten Stories in American History: The Battle of Peleliu

This is the first in a series of posts we’re calling Forgotten Stories in American History. It will  point out events, people, ideas and places from our history that you may not know about, stories that illuminate aspects of the history you already teach. We hope they will deepen your understanding of our history, while helping you add more options to your lessons.

The Battle of Peleliu

On 15 September 1944, after several days of heavy naval and aerial bombardment, Americans from the 1st Marine Division — a veteran unit that had fought with distinction at Guadalcanal – landed on the beaches of Peleliu, a small island at the southern end of the Palau chain. Palau sits north of New Guinea and the eastern coast of the Philippines, and was home to an airstrip and defenses for over 11,000 Japanese troops.

General Douglas MacArthur, noting its location and the airfield, asserted that the Japanese garrison there needed to be destroyed before his planned invasion of the Philippines, set to take place in October, 1944. Despite pushback from some within the Navy, including Admiral William Halsey – who believed that the island could be isolated with airstrikes and ships, and that the Marines would be put to better use invading the Philippines — MacArthur convinced Admiral Chester Nimitz that the operation was essential. The 1st Marine Division would land on the island after what had become a customary days-long bombardment phase, and General William Rupertus, 1st Marine Division commander, assured both his troops and his superiors that the island would be completely in American hands in just a few days. The Army’s 81st Infantry Division would stand by to assist the Marines if needed, although Rupertus was dismissive of the Army and made no secret of his confidence that his Marines would get the job done alone.

Peleliu fit cleanly, it seemed, within the context of America’s “Island Hopping” campaign. It was a small island surrounded by coral reefs and covered in dense vegetation. It was mostly flat, or so it seemed from the few aerial photographs and old maps, and the Japanese garrison there could be cut off from support and resupply by the U.S. Navy. What American planners did not know, however, would create a cascade of problems once the Marines hit the beaches. Rupertus’ “two to three days” would turn into months, and his men would suffer the highest casualty rate for a Marine division of the war. Fully one third of Marines committed were killed, wounded, or listed as missing.

How could the invasion have gone so wrong? Since Guadalcanal, Americans had perfected their amphibious landing tactics. Despite stiff Japanese resistance, island invasions had become almost routine in their development and resolution by the summer of 1944. Now, at Peleliu, the Japanese defenders weren’t responding as they had during previous amphibious assaults. 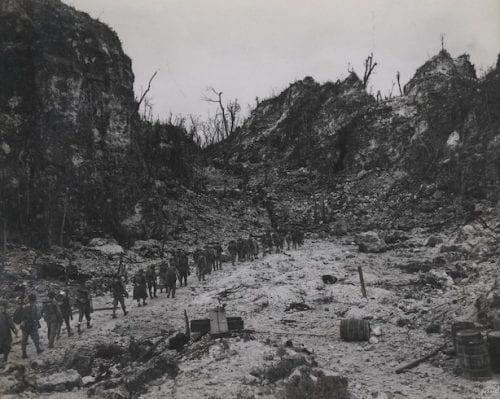 Japanese defensive tactics had shifted. Instead of meeting the Americans at the beaches and trying to overwhelm them with waves of “banzai” charges, the Japanese decided to engage a longer battle, causing more casualties and perhaps blunting the American advance toward their home islands. In short, the Japanese recalibrated their defensive model, digging miles of tunnels in the mountains on Peleliu — terrain features that were hidden by dense foliage and unknown to American forces. Instead of defending the beaches, they would cede them to the Marines, who once ashore would be exposed to withering, sustained attacks from hidden bunkers, tanks, infantry, and hundreds of mortars and guns hidden in a honeycomb of caves overlooking the beaches and airfield. Instead of trying to stop the Americans from achieving a foothold on the island, the Japanese sought to grab hold of the Marines, once landed, and refuse to let them go, creating a situation in which the only way “forward” would be to continue fighting, while losing many troops over time. The Japanese accepted that they would lose these islands; however, they would not do so before demanding a terrible price from the American invaders.

Thus, when the 1st Marine Division landed, instead of capturing the island within days, they discovered rugged terrain beyond anything they had anticipated, an enemy that had been barely harmed by the pre-invasion naval and air attacks, and a new and unexpected defensive plan.

The battle at Peleliu was officially declared over in late November 1944, although American troops continued to experience casualties until well into 1945, as Japanese defenders, hidden in caves, refused to surrender. The operation, which became something like World War I trench warfare in the tropics, was quickly overshadowed by the American invasion of the Philippines, and MacArthur’s dramatic “return” there. In Europe, attention focused on the failed airborne attack in Holland in September, and then the slowing of operations as the weather turned. Peleliu, despite severely wounding the 1st Marine Division, which would not be ready for combat again until April 1945, and causing significant casualties for the Army’s 81st Infantry Division, virtually disappeared from  news coverage. Most students of history — casual or otherwise — know little about it.

What makes it worth study, then? Peleliu is worth considering less for what American forces did there and more because of what American forces later did in response to it. The invasions of both Iwo Jima and Okinawa — larger, more important strategically, and more well-known — were planned based on the lessons learned at Peleliu, and the awareness of the shift in Japanese tactics. American experiences at Iwo Jima were analyzed and used to adjust the invasion plans for Okinawa. If anything, Peleliu encouraged American planners to revisit their models, which probably contributed to more successful operations.

Yet one can study Peleliu for the impact it made on its veterans.  Several excellent combat memoirs recount what happened there. Eugene Sledge was a Marine infantryman on Peleliu and Okinawa, and wrote “With the Old Breed,” an honest, deeply personal account of his experience on the ground in the war in the Pacific. Sledge went on to teach chemistry at the college level, and wrote his book later in life. “Brotherhood of Heroes,” by Bill Sloan, is a great story and analysis of the battle, from a more traditional historical perspective, albeit with a multitude of personal accounts. “Cowboy Down: A WWII Marine Fighter Pilot’s Story,” by Glenn “Bud” Daniel, tells of the battle from the perspective of a young fighter pilot whose first experience in combat was on Peleliu, and who would see his unit commander — and Marine Ace from Guadalcanal — shot out of the air right next to him. Osprey Publishing’s “Peleliu 1944: The Forgotten Corner of Hell” is a good, short, story of the campaign, too.

Service members  in the Pacific endured a brutal and intense experience. Those who fought on the ground saw the worst of it. Despite being almost forgotten in mainstream histories, the Battle of Peleliu taught our military important lessons about warfighting. First-hand accounts of the battle show what it was like for the “Greatest Generation” to bear the burden of war. If you’re looking for new insight into World War II — something a little off the beaten path but still important — the Battle of Peleliu is worth your attention.