RSQs and the Yellow Kid

Rusty Eder, who teaches American history and government at West Nottingham Academy in Maryland, prompts students to think by asking seemingly goofy questions that lead in fascinating directions. Eder is a 2011 graduate of the Master of Arts in American History and Government.

If you teach long enough, you get introduced to dozens and dozens of acronyms for new and (sometimes) innovative methods and techniques, all designed to help you get and keep the attention of the students in your class. At one time or another, I have worked on everything from PBL (Project Based Learning) to POGIL (Process Oriented Guided Inquiry Learning) to DI (Differentiated Instruction), and many more. These all have their value at the right time and place, but I discovered long ago my own favorite method, one I call the RSQ, short for Really Silly Question. Catching the class’s attention with a notion so absurd they have to get to the bottom of it has given me some of the most enjoyable days of my teaching career.

On occasion, I’ve wondered if fleas might have painted the Sistine Chapel or if the Battle of Antietam might have turned out differently if General D.H. Hill didn’t smoke. But my favorite example of the RSQ goes like this: I have a class of 11th-12th graders in U.S. History and we’re in our Gilded Age/Age of Imperialism unit. They’ve gotten to know some of the players in the great Captains of Industry versus Robber Barons debate and are ready to discuss some of the more extravagant examples of Yellow Journalism from that period. So, they come into class and I write the RSQ on the board.  “Did Mickey Dugan start the Spanish-American War?” Of course, their first thought is something like “Huh?” “What the…?” But they’re paying attention and sooner or later one of them will ask the obvious question. “Uhm, Mr. Eder, who on earth is Mickey Dugan?”  So, I show them his picture: 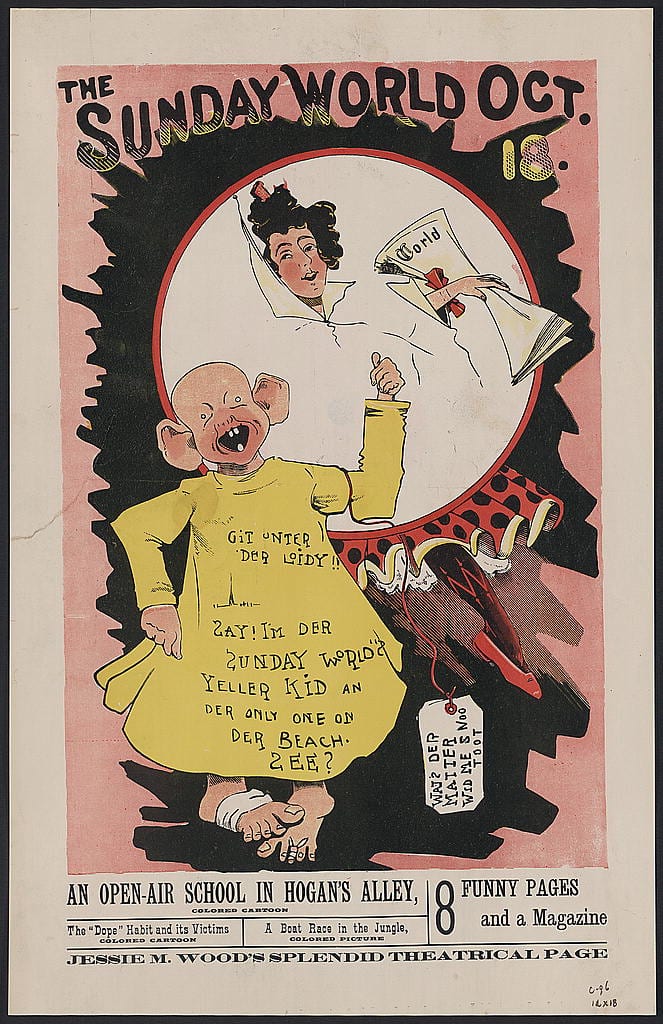 Usually, this doesn’t help a whole lot, though a few might guess that the color of his shirt has something to do with Yellow Journalism, though they’re not sure what. So, I take them to the R.F. Outcault Society’s Yellow Kid site, here: http://www.neponset.com/yellowkid/

As we wander through the site, it’s easy to set up the competition between Joseph Pulitzer’s World, and William Randolph Hearst’s New York Journal. If you’re not familiar with the story, Outcault originally drew the comic strip for Pulitzer before being hired away by Hearst, setting off a competitive war for attention (and subscriptions) that became emblematic of the “do anything for a sale” attitudes of both publishers.  What is initially referred to as the “Yellow Kid Papers” or “Yellow Kid Wars” morphs pretty easily into the “Yellow Papers” and “Yellow Journalism” in general. So, I have them started on the major theme, but the real glory of a good RSQ is all the side streets you get to take while exploring it. Some of the other topics we generally delve into are: 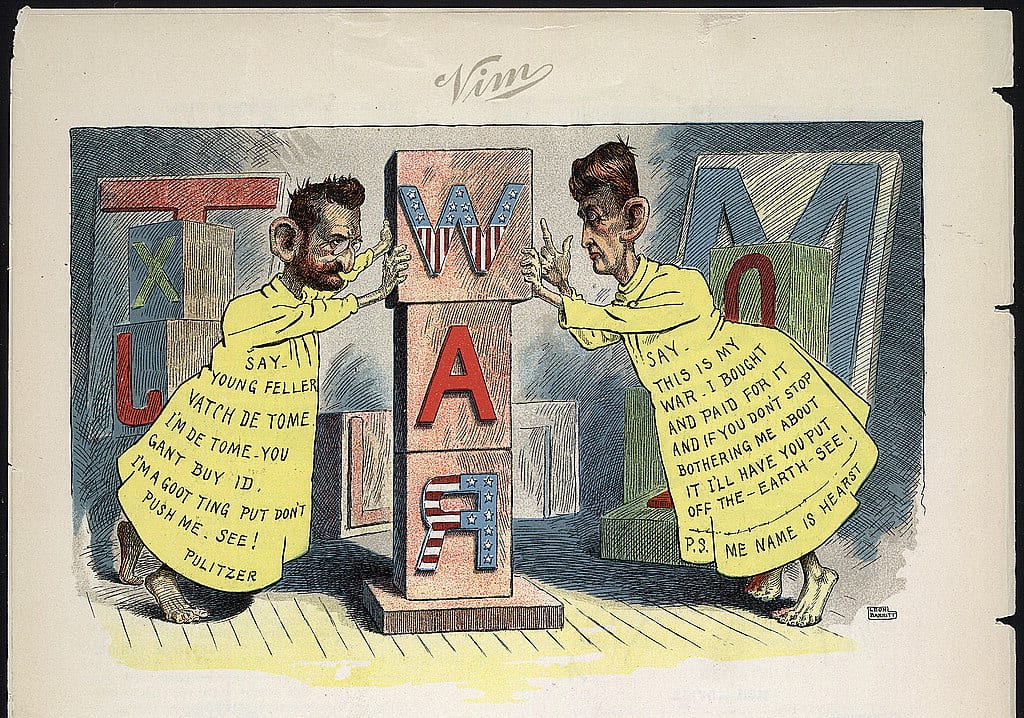 At this point I bring out Len Barritt’s classic cartoon “Big Type War of the Yellow Kids” which takes us right back to the Spanish American War and, “You furnish the pictures and I’ll furnish the war.”

After that, I’m free to bring all sorts of other possibilities into the class. Issues of copyrights and intellectual property come up, along with the dual interpretation of comics by kids, who see a favorite character having a good or bad day, and their parents, who get a different sort of chuckle from the same work. Another fun side trip involves the marketing of Mickey Dugan on everything from cookie tins to ten-pin sets and candy jars. The National Cigarette and Tobacco company of New York even sold Yellow Kid Cigarettes!  Always good for a conversation.

I have a lot of fun with the RSQ, but at the end of the day, it’s also an excellent way to get my students’ attention and engage them actively in their own learning. As we move forward into the Spanish American War and further adventures in the Age of Imperialism, this exercise keeps the issues of propaganda, jingoism, and the role of the media in politics close to the surface for the class and that’s the greatest satisfaction I get from asking such nonsense in the first place.

W. E. B. Du Bois and the Niagara Movement